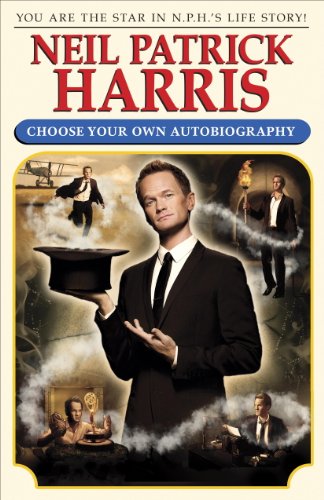 Here are new celebrity memoirs you may not have heard about yet (since these first two were just released this week!), but they’re generating a lot of buzz and racking up lots of rave reviews!

Tired of memoirs that only tell you what really happened?

Sick of deeply personal accounts written in the first person? Seeking an exciting, interactive read that puts the “u” back in “aUtobiography”? Then look no further than Neil Patrick Harris: Choose Your Own Autobiography! In this revolutionary, Joycean experiment in light celebrity narrative, actor/personality/carbon-based-life-form Neil Patrick Harris lets you, the reader, live his life. You will be born to New Mexico. You will get your big break at an acting camp. You will get into a bizarre confrontation outside a nightclub with actor Scott Caan. Even better, at each critical juncture of your life you will choose how to proceed. You will decide whether to try out for Doogie Howser, M.D. You will decide whether to spend years struggling with your sexuality. You will decide what kind of caviar you want to eat on board Elton John’s yacht.

Choose correctly and you’ll find fame, fortune, and true love. Choose incorrectly and you’ll find misery, heartbreak, and a hideous death by piranhas. All this, plus magic tricks, cocktail recipes, embarrassing pictures from your time as a child actor, and even a closing song. Yes, if you buy one book this year, congratulations on being above the American average, and make that book Neil Patrick Harris: Choose Your Own Autobiography! 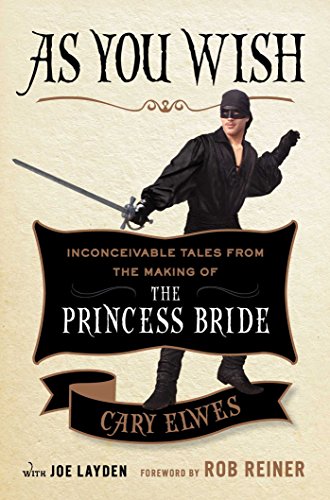 As You Wish: Inconceivable Tales from the Making of The Princess Bride (5/5 stars, currently priced at $11.99)

From actor Cary Elwes, who played the iconic role of Westley in The Princess Bride, comes a first-person account and behind-the-scenes look at the making of the cult classic film filled with never-before-told stories, exclusive photographs, and interviews with costars Robin Wright, Wallace Shawn, Billy Crystal, Christopher Guest, and Mandy Patinkin, as well as author and screenwriter William Goldman, producer Norman Lear, and director Rob Reiner.

Cary Elwes was inspired to share his memories and give fans an unprecedented look into the creation of the film while participating in the twenty-fifth anniversary cast reunion. In As You Wish he has created an enchanting experience; in addition to never-before seen photos and interviews with his fellow cast mates, there are plenty of set secrets and backstage stories.

With a foreword by Rob Reiner and a limited edition original poster by acclaimed artist Shepard Fairey, As You Wish is a must-have for all fans of this beloved film. 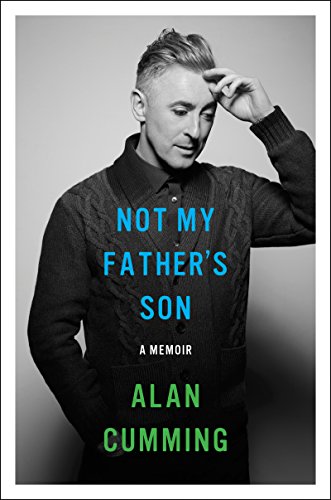 In his unique and engaging voice, the acclaimed actor of stage and screen shares the emotional story of his complicated relationship with his father and the deeply buried family secrets that shaped his life and career.

When television producers in the UK approached him to appear on a popular celebrity genealogy show in 2010, Alan enthusiastically agreed. He hoped the show would solve a family mystery involving his maternal grandfather, a celebrated WWII hero who disappeared in the Far East. But as the truth of his family ancestors revealed itself, Alan learned far more than he bargained for about himself, his past, and his own father.

With ribald humor, wit, and incredible insight, Alan seamlessly moves back and forth in time, integrating stories from his childhood in Scotland and his experiences today as a film, television, and theater star. At times suspenseful, deeply moving, and wickedly funny, Not My Father’s Son will make readers laugh even as it breaks their hearts. 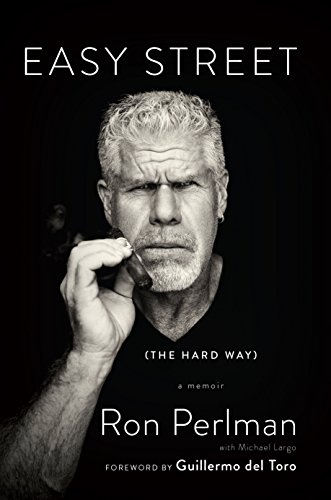 The candid, hilarious, and inspiring memoir of the iconic star of Beauty and the Beast,the Hellboy movies,and Sons of Anarchy.

A classically trained actor who cut his teeth in the East Village’s Off-Broadway scene, Ron Perlman—a Golden Globe winner (Beauty and the Beast) with starring roles in the Hellboymovies, Drive, Pacific Rim, and Sons of Anarchy—has traveled an offbeat path to showbiz success. His story involves rising from New York’s tough Washington Heights neighborhood, enduring incredible hardships, and ignoring the naysayers who taunted him for his distinctive looks. It’s a tale that demonstrates the power of persistence.

With a filmography of nearly 200 credits working alongside countless stars during his forty-year career, Perlman knows the ins-and-outs of filmmaking. In Easy Street (the Hard Way), he shares his inspiring story for the next generation of performers.

Also check out these soon-to-be-released, hotly anticipated memoirs from comedians you know and love. All three of these are currently available for pre-order; when you pre-order the book just shows up on your Kindle or Fire on release day—it’s like a little surprise party for you! 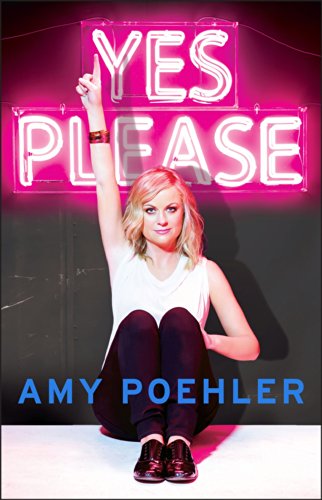 In Amy Poehler’s highly anticipated first book, Yes Please, she offers up a big juicy stew of personal stories, funny bits on sex and love and friendship and parenthood and real life advice (some useful, some not so much), like when to be funny and when to be serious.

Powered by Amy’s charming and hilarious, biting yet wise voice, Yes Please is a book full of words to live by. 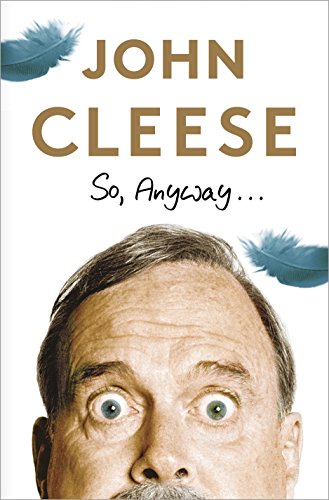 John Cleese’s huge comedic influence has stretched across generations; his sharp irreverent eye and the unique brand of physical comedy he perfected with Monty Python, on Fawlty Towers, and beyond now seem written into comedy’s DNA. In this rollicking memoir, So, Anyway…, Cleese takes readers on a Grand Tour of his ascent in the entertainment world, from his humble beginnings in a sleepy English town and his early comedic days at Cambridge University (with future Python partner Graham Chapman), to the founding of the landmark comedy troupe that would propel him to worldwide renown.

Cleese was just days away from graduating Cambridge and setting off on a law career when he was visited by two BBC executives, who offered him a job writing comedy for radio. That fateful moment—and a near-simultaneous offer to take his university humor revue to London’s famed West End—propelled him down a different path, cutting his teeth writing for stars like David Frost and Peter Sellers, and eventually joining the five other Pythons to pioneer a new kind of comedy that prized invention, silliness, and absurdity. Along the way, he found his first true love with the actress Connie Booth and transformed himself from a reluctant performer to a world class actor and back again.

Twisting and turning through surprising stories and hilarious digressions—with some brief pauses along the way that comprise a fascinating primer on what’s funny and why—this story of a young man’s journey to the pinnacle of comedy is a masterly performance by a master performer. 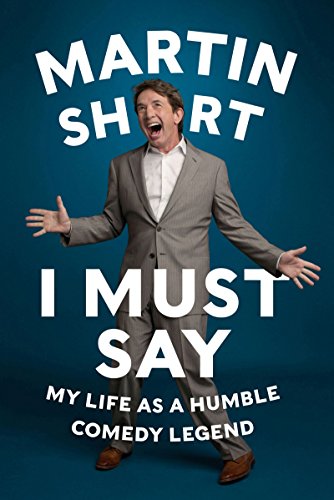 In this engagingly witty, wise, and heartfelt memoir, Martin Short tells the tale of how a showbiz obsessed kid from Canada transformed himself into one of Hollywood’s favorite funnymen, known to his famous peers as the “comedian’s comedian.”

Short takes the reader on a rich, hilarious, and occasionally heartbreaking ride through his life and times, from his early years in Toronto as a member of the fabled improvisational troupe Second City to the all-American comic big time of Saturday Night Live, and from memorable roles in such movies as ¡Three Amigos! and Father of the Bride to Broadway stardom in Fame Becomes Me and the Tony-winning Little Me.

But there is another side to Short’s life that he has long kept private. He lost his eldest brother and both parents by the time he turned twenty, and, more recently, he lost his wife of thirty years to cancer. In I Must Say, Short talks for the first time about the pain that these losses inflicted and the upbeat life philosophy that has kept him resilient and carried him through.

In the grand tradition of comedy legends, Martin Short offers a show-business memoir densely populated with boldface names and rife with retellable tales: a hugely entertaining yet surprisingly moving self-portrait that will keep you laughing—and crying—from the first page to the last.