Shade City: The Dead Side Blues 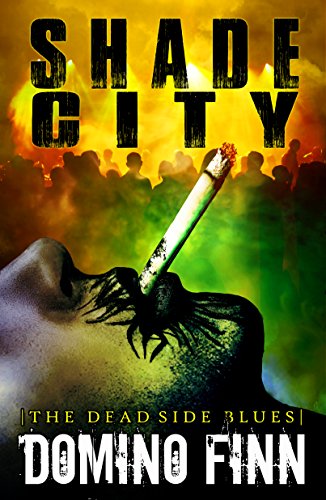 Dante Butcher is a twenty-four-year-old programmer living alone in Los Angeles. At least, that’s the part of him people see. He doesn’t tell them he dreams of the Dead Side: a skewed land of past and present inhabited by shades.

Dreams are one thing, but matters are complicated when the dead don’t agree to stay that way. Shades like to drink and smoke and revel in the pleasures of the flesh. They cling to the physical world, but they can’t stand here on their own. They need to attach to something tangible. Usually that means other people.

Possession. It is a means for the dead to hide in plain sight. But Dante Butcher is more than he appears as well. He can see them. The shades. The fakers. And he’s not at all alone either. He’s haunted by the ghost of a murdered little girl who may end up being his only ally. Yet, as Dante gets more involved with the machinations of the dead, he learns one important truth: you can’t trust shades.

About The Author
Domino Finn is a science-fiction and fantasy author who has a decade of award-winning experience in the video game industry in Los Angeles. He likes to write about believable characters in unbelievable circumstances. Travel, technology, and trouble are his inspirations; music and football his distractions; and alcohol, well, it depends on the number of drinks.