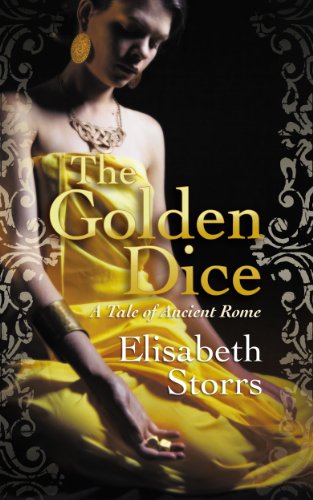 Three women follow very different paths to survive a ten year siege between Rome and the Etruscan city of Veii:

Caecilia forsakes Rome to return to her Etruscan husband, Vel Mastarna, exposing herself to the enmity of his people and the hatred of the Romans who consider her a traitoress…

Semni, a reckless Etruscan girl, becomes a servant in the House of Mastarna, embroiling herself in schemes that threaten Caecilia’s children and her own chance for romance…

Pinna, a tomb whore, uses coercion to escape her grim life and gain the attention of Camillus, Rome’s greatest general, choosing between her love for him and her loyalty to another…

Historical Fiction at its best, this second volume in the Tales of Ancient Rome series explores the lives of women in war, giving a glimpse into the sexuality, religion, and politics of Roman and Etruscan cultures, two great civilizations in ancient history. It can be read as a stand alone book.

The Golden Dice was judged runner-up in the international Sharp Writ Book Awards in general fiction, and was named as one of the top memorable reads of 2013 by Sarah Johnson, the reviews editor for the Historical Novels Review. The Wedding Shroud, the first book in the series, was judged runner-up in the 2012 Sharp Writ Book Awards, and was a finalist in the 2013 Kindle Book Review Best Kindle Book of the Year in literary fiction.

Recently, Elisabeth has opened her new collection of short stories in her Short Tales of Ancient Rome series in which she retells the legends and history of Rome from a fresh perspective. Dying For Rome: Lucretia’s Tale is the first story in the series.

Reviews
“Skillfully plotted and with vividly drawn characters, The Golden Dice is a suspenseful, romantic, exciting drama that transports its readers into the ancient cities of Veii, fighting for its independence, and insatiable Rome, determined to devour it. Love; seduction; black magic; bloody battles; courageous (and sexy) heroes; despicable villains, and, best of all, inspiring heroines, The Golden Dice kept me turning its pages — with increasing speed — to the very end.” – Sherry Jones, Author, Four Sisters, All Queens and The Jewel of Medina

“Storrs fills her canvas with the complexities of human emotion: love, trust, and loyalty; hate, envy, and revenge.  With each of the characters, male and female, she dissects contrasting values, using the cultural differences between Etruria and Rome to show the psychological torment of conflicting loyalties.”  – Lisa Hill, ANZ Lit Lovers Lit blog