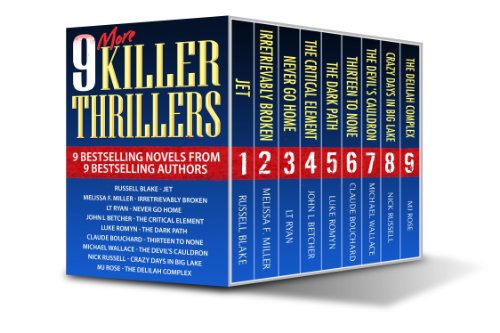 A second bundle from the authors that brought you 9 Killer Thrillers, with over 150,000 sold! Same incredible value, different titles!

* Thousands of reviews & average ratings of 4.4, 4.6, even 4.7 stars
* Hundreds of thousands of copies of each already in distribution
* Sustained Top 100 authors

JET – the code name of a former Mossad operative who faked her own death to escape the clandestine life. But the past doesn’t let go of its secrets easily, and when old enemies hunt her down she is forced to kill or be killed in a deadly conflict that spans the globe. A breakneck thriller in the tradition of Bourne and Bond, JET is a non-stop adrenaline rush that redefines the genre.

Irretrievably Broken features the return of fierce and fearless attorney Sasha McCandless. Someone’s killing the female partners at her old firm, and she’s asked to represent their accused husbands. The cases put a strain on her own relationship, but that’s the least of her troubles, because the real killer is waging a vendetta for a past case gone wrong: and there’s one more lawyer on his list.

When a woman is found brutally murdered in a small Florida town, Jack Noble breaks his vow to never return home in order to assist the local sheriff with her investigation. As the hunt for the killer intensifies, Jack realizes his past as a government assassin has come back to haunt those closest to him.

The theft of a mysterious meteor leads Beck, Beth, Gunner and Bull to uncover a terror plot that threatens the country’s largest shopping mall. Meanwhile, the FBI, CDC and CIA attempt to defuse a large-scale biological attack and avert a crippling pandemic.

The Dark Path by Luke Romyn

Vain, a man versed in torture and death, is chosen to protect a boy whose sacrifice will release Satan’s lieutenant from the pits of Hell. Armageddon sits upon the horizon and all that stands in its way is a man whose path has always been dark.

Thirteen to None by Claude Bouchard

The Devil’s Cauldron by Michael Wallace

Paralyzed and locked in, Meggie can’t tell anyone what really happened the night of her accident seven years earlier. Now, for the first time, there’s hope for a cure — and there are those who will kill to keep it away from her…

Everybody seems to have gone crazy in Big Lake; neighbors are threatening violence,  eco-protestors are on the march, flower children are camping in the forest, the grocery store manager has locked himself in his office and won’t come out, bears are chasing dogs into houses, and a retired couple have shot an intruder during a home invasion. By the time it’s over more blood will be shed and the good people of Big Lake will be left wondering just how well they really know their neighbors.

The Delilah Complex by MJ Rose

The Scarlet Society is a secret club of twelve powerful and sexually adventurous women. But when a photograph of the body of one of the men they’ve recruited to dominate is sent to the New York Times, they are shocked and frightened. Unable to cope with the tragedy, the women turn to NYC sex therapist Dr. Morgan Snow. But their grief counseling quickly becomes a murder investigation.