“The novel is an enthusiastic, well-researched, fictional account of what happened to the infamous wives of Henry VIII.” Kirkus Indie Review 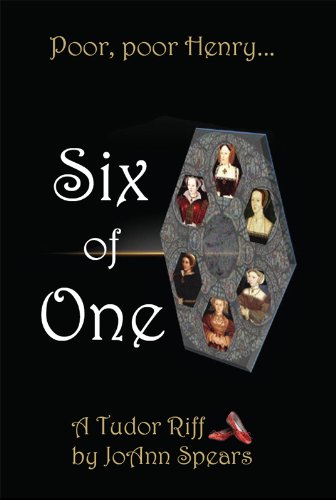 21 Rave Reviews
Kindle Price: 99 cents
Text-to-Speech and Lending: Enabled
Don’t have a Kindle? Get yours here.
Here’s the set-up:

“Six of One” is the ultimate ‘girls’ night in’…with the six wives of Henry VIII. It’s the most fun you can have with your nightdress on! Join Dolly, the Tudor-obsessed heroine of “Six of One”, on a Yellow Brick Road journey to the alternate reality of an all-girl Tudor court.

It all begins when Dolly loses consciousness on the eve of her marriage to the six-times- divorced Harry. She awakens in the company of the Tudor women she’s studied all her life. They have a mission to accomplish, and Dolly may be just the girl who can help them do it.

As a warm-up to her life-changing interview with the six wives of Henry VIII, Dolly gets to dish with lots of the other fascinating females of the Tudor era. She learns things she never guessed about the Princes in the Tower from their sister, Elizabeth of York…Henry VIII’s mom. She talks sex with Henry’s sisters and scholarship with his daughters. She even gossips with the help, since Kat Ashley and Bess of Hardwicke are among the ladies on hand.

Of course the heart of the story is in Dolly’s interview with the six wives of Henry VIII. It turns out there’s something to each of the wives’ stories that’s been held back all this time. You won’t believe what really happened…or will you?

“Six of One” offers no tragedy, no excuses, and no apologies. It does have lots of broad humor, not to mention tons of puns. And—for a change—a happy ending.

Reviews
“A fun, rather irreverent, entertaining spoof…A wonderful read when you need a bit of light relief.” Claire Ridgway, ‘Anne Boleyn Files’
“Six of One: A Tudor Riff by JoAnn Spears is a perfect read for a cold night, a glass of wine, and a comfy couch. Fast paced, humorous, and often written in rhyme, this quintessential chick-lit is worth the time…Spears masterfully weaves fact with fiction creating a tale too good to pass up. Consider it the best gossip in centuries.”  Portland Review
About The Author

JoAnn Spears couldn’t decide whether to major in English or History in college. Life stepped in, and she wound up with a Master’s Degree in Nursing instead. A twenty-five year nursing career didn’t extinguish that early interest in books and history-especially Tudor history. It did, however, stoke a decidedly gallows sense of humor. JoAnn decided that if anyone qualified for a gallows sense of humor, it was the Tudors. A little inspiration from the classic “Wizard of Oz” showed her the way to go and “Six of One”, a new kind of Tudor novel, was born.

“Six of One” was begun in JoAnn’s native New Jersey. It was wrapped up in her new Smoky Mountain home in northeast Tennessee, where she is pursuing a second career as a writer. She has, however, obtained a Tennessee nursing license because a) you never stop being a nurse and b) her son thinks she should be sensible and not quit her day job. “Six of One” is a different kind of historical novel, but JoAnn is a pretty typical old-school lady author. She has cats, needlework, a cottage garden, and frighteningly complete collections of Jane Austen and Louisa May Alcott. She is also an avid Jazzerciser and newbie yogi.