I’ll Be Home For Christmas (A Coming Home Novella) 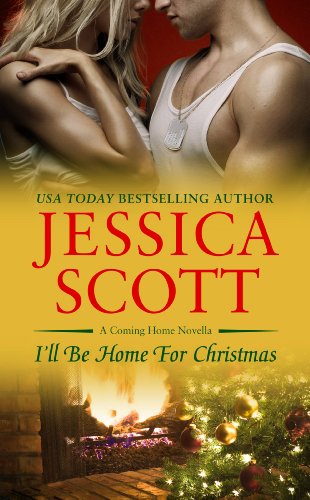 There’s nothing in the world Army Sergeant Vic Carponti loves more than his wife and his country. Smart-mouthed and easy tempered, he takes everything as a joke . . . except his promise to come home to his wife, Nicole, for Christmas. As he prepares to leave for his latest deployment into Iraq, Vic will do everything he can to shield his beautiful, supportive wife from the realities of war . . . and from his own darkest fears.

As a career army wife, Nicole Carponti knows just what to expect from her husband’s tour of duty: loneliness, relentless worry, and a seemingly endless countdown until the moment Vic walks through the door again. But when the unthinkable happens, Nicole and Vic’s bond is tested like never before and changes everything they believe to be true about the power of love and the simple beauty of being home for the holidays.

5-Star Amazon Reviews
“…I really, really love I’ll Be Home For Christmas. Jessica will make you feel a myriad of emotions from humor, to sadness, to love and hope. This is one of those books that will make you stop and think about what’s really important. Jessica does this with her powerful, realistic, heart felt writing.”
“This was a wonderful Christmas story and a passionate and sweet romance novella…”
About The Author

USA Today Bestselling author Jessica Scott is a career army officer, mother of two daughters, three cats and three dogs, wife to a career NCO and wrangler of all things stuffed and fluffy. She is a terrible cook and even worse housekeeper, but she’s a pretty good shot with her assigned weapon and someone liked some of the stuff she wrote. Somehow, her children are pretty well adjusted and her husband still loves her, despite burned water and a messy house.

She’s written for the New York Times At War Blog, PBS Point of View Regarding War, and IAVA. She deployed to Iraq in 2009 as part of OIF/New Dawn and has served as a company commander at Fort Hood, Texas.

She’s pursuing a PhD in Sociology in her spare time and most recently, she’s been featured as one of Esquire Magazine’s Americans of the Year for 2012.