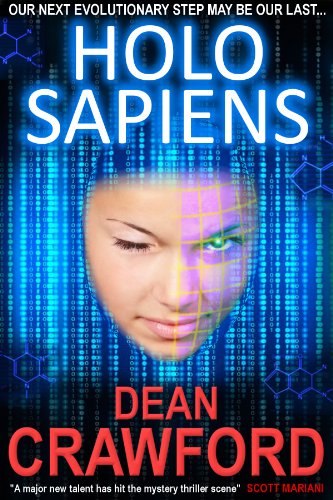 Kindle Price: 99 cents
Text-to-Speech and Lending: Enabled
Don’t have a Kindle? Get yours here.
Here’s the set-up:

“I’m glad my life came to an end. That was when it really began.”

In the near future, a horrific pandemic known as The Falling has decimated mankind, leaving just a few cities standing. In a desperate bid to prevent the extinction of our race, technology has given rise to an entirely new species: Holo Sapiens.

Those fortunate enough to be able to afford it can be resurrected after death as holographic projections immune to disease, hunger and time itself. But as the human survivors of The Falling make their last defiant attempt to find a cure before the last cities fall and political power is passed to the holosaps, the discovery of a “kill-switch” that could see Holo Sapiens consigned to history changes the world. As the prospect of war looms between the living and the “after-living”, it is down to one woman to find the kill-switch before mankind and Holo Sapiens attempt to erase each other from existence…

“The fossilized remains of a 7,000-year-old creature dug from the sands of the Negev Desert in Israel become the bones of contention in Dean Crawford’s fast-paced debut thriller… The book neatly threads together a wild variety of plotlines.” Wall Street Journal

“Partly mythical read, part thriller this pacy tale is a page turner guaranteed to keep you up late.” The Sun