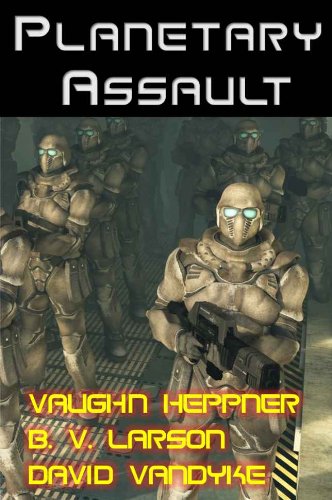 4.6 stars – 27 Reviews
Kindle Price: 99 cents
Text-to-Speech and Lending: Enabled
Don’t have a Kindle? Get yours here.
Or check out the Audible.com version of Planetary Assault (Star Force Series)
in its Audible Audio Edition, Unabridged!
Here’s the set-up:

Sometimes defending those you love means risking everything and attempting the most dangerous task in the universe—making a planetary assault against a heavily entrenched enemy. It’s grim and always ugly. But as long as men refuse to bow their heads to conquerors, they will take the fight to the enemy or die trying.

Three masters of military science fiction have come together to tell harrowing tales of high-tech mayhem. In BV Larson’s “Army of One” the Macros of the Star Force series invade from the skies, forcing a nanotized assassin into a deadly decision. David VanDyke’s “First Conquest” tells of a bitter battle as EarthFleet smashes into an alien star system in a desperate first strike to save humanity. Vaughn Heppner’s Space Marines of the Doom Star series race to the Oort Cloud in “Cyborgs!” For them, the hour of desperation has arrived.

Planetary Assault drips of glorious victories and grim defeats as humanity forces its way into the galaxy through sheer fighting ability. Despite their opponents, mankind will not be denied.

5-Star Amazon Reviews
“A great collection of short novels (that actually aren’t that short) from some of the biggest names in the military sci-fi genre…”
“This page turner achievement, with the many Armageddon-like scenes and entrancing heroism, is a MUST for Sci-fi lovers.”