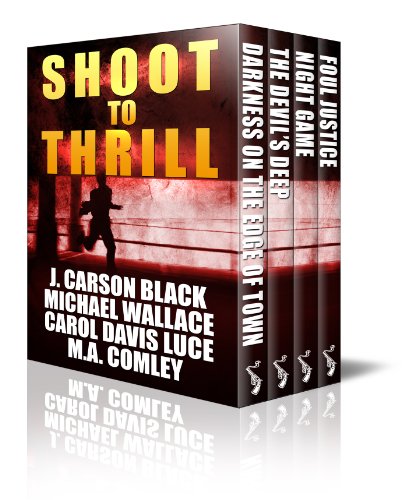 5.0 stars – 2 Reviews
Kindle Price: 99 cents
Text-to-Speech and Lending: Enabled
Don’t have a Kindle? Get yours here.
Here’s the set-up:

DARKNESS ON THE EDGE OF TOWN (J Carson Black)
When CI Laura Cardinal is called in to investigate the murder of a fourteen-year-old runaway found murdered in a park, Laura knows immediately she’s up against a cunning sexual predator. Worse, the incident has her confronting ghosts dredged up from her own past. Then another child goes missing–and Laura must put aside her own conflicting emotions and race the clock to find her. A Daphne du Maurier Award nominee.

THE DEVIL’S DEEP (Michael Wallace)
Chad Lett is a mute witness to an attempted murder. He suffers from total paralysis, locked within a prison of his own mind. After years of silence, he establishes contact with a young nurse’s aide through a single blinking eye. But then she is abducted, and a staff member begins to administer dropperfuls of cleaning solution into Chad’s lone communicating eye…

NIGHT GAME (Carol Davis Luce)
Nevada. The King’s Club resort casino is a playground for gamblers with everything to gain … and the hunting ground for a shadowy killer with nothing to lose. An expert at undercover surveillance, PI Kasey Atwood is drawn to the sensual, enigmatic owner, Jay King, who’s placed his bets on her talents. As their love affair heats up, though, she becomes a pawn in a game of passion and revenge that puts her heart — and her life — at risk.

FOUL JUSTICE (M A Comley)
Before DI Lorne Simpkins can get comfortable with her new partner, the two are assigned a tragic murder case that looks like a robbery gone wrong. Further compromising Lorne’s focus is the personal news that her fiancé, M16 agent Tony Warner, is involved in a dangerous covert operation in Afghanistan. Then another wealthy footballer’s family meets the same deadly fate within twenty-four hours, and Lorne must bring all her resources to bear to stop the killers…