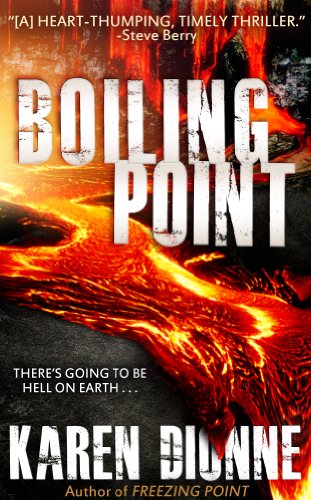 4.7 stars – 21 Reviews
Kindle Price: 99 cents
ON SALE! REGULARLY $3.99
Text-to-Speech and Lending: Enabled
Don’t have a Kindle? Get yours here.
Or check out the Audible.com version of Boiling Point (Point Series)
in its Audible Audio Edition, Unabridged!
Here’s the set-up:

Two microbiologists monitor the effects of global warming in the shadow of the long-dormant volcano.

A celebrity scientist and his film crew arrive at the caldera to capture Chaitén’s spectacular scenery for a television audience.

And a Nobel Prize-winning scientist sits in his apartment in Paris, monitoring data on fifty-six volcanoes around the world—waiting for the one sign that his diabolical plan is about to be put into motion.

Soon, their destinies will converge. For the Earth has become a pawn in the biggest gamble ever played with humanity’s future…

And Chaitén is about to blow.

“Dionne hits her stride with this heart-thumping, timely thriller, one that rings with surreal authenticity. All of the right elements — action, suspense, secrets, conspiracies — meld together, the plot built skillfully, like a master craftsman, one layer at a time. Put simply, it’s a non-stop delight of a read.” — New York Times bestselling author Steve Berry

“Dionne’s follow-up to Freezing Point delivers more science thrills. The narrative flows well, the characters are sharp and the setting is explosive. While the chaos compels the reader to turn pages, the science reinforces a scenario that is all too real and terrifying. Readers will seek out the previous book and anxiously await the next one.” — RT Book Reviews – 4 stars