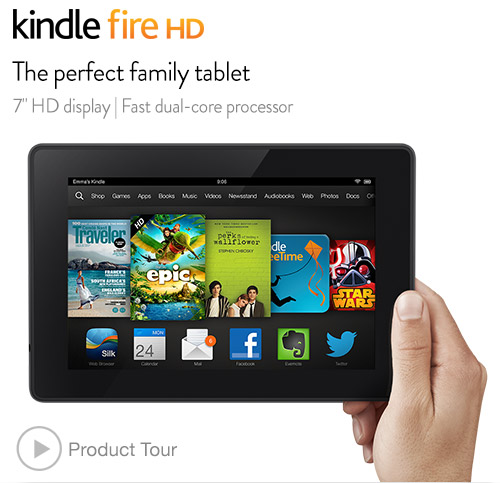 Note that this post is about the new, basic Kindle Fire HD tablet, NOT one of the yet-to-ship HDX models. I’ll be writing about those later, after I’ve had a chance to actually use one.

Costs Less, Yet Comes With A Charger!

At $139 (price as of this writing) the entry-level, 8GB KFHD2 is selling for $20 less than the original Kindle Fire HD, which sold for $159.  But here’s another bonus that adds even more to the value: unlike its predecessor, the KFHD2 comes with a charger. Plenty of people had to buy a separate charger last time around and they weren’t happy about it, so it’s nice to see Amazon including this truly essential accessory at no extra charge for the KFHD2.

The KFHD2 has a sleek new casing with a beveled edge design on both the front and back, a narrower “bezel” (dark area around the display screen), and its controls have been relocated for better convenience and seamless accessibility. While it appears to be about the same thickness as the original Kindle Fire HD at its center, the wide, beveled edge that goes all the way around the back of the case gives the KFHD2 the look and feel of a thinner tablet.

The new machine feels better in the hands as well as a little lighter, it looks even better than the original, and the new button and port locations are a HUGE improvement.

Yes, It DOES Have Speakers

Because the newly-designed chassis has been redesigned to make controls unobtrusive, some people are saying the KFHD2 doesn’t have speakers. This is not true. The KFHD2 has Dual Dolby Digital sound, with stereo speakers located on the rear, beveled edge. They’re just hidden behind small vents which some people seem to think are cooling vents instead of speakers.

I can tell you from personal experience, the speakers are there and they sound just as good as on my first-gen Fire HD.

The new volume control is a rocker switch that’s set into the wide, beveled edge on one side of the tablet’s back, and the power button is on the opposite beveled edge, also at the back. Both of these controls have a rubbery feel and are sized larger than in the previous model, making them easy to locate and use even though they can’t be seen when the tablet’s in use. When the KFHD2 is held in the hands these controls are easily accessible to the fingertips, yet are placed slightly above the place where the hands rest most comfortably so they’re not likely to be pressed accidentally.

The headphone jack is more or less in the same location, but the USB port has been moved from the bottom edge to one of the front, beveled side edges. This is an improvement because in its old location, it was difficult to prop the Fire up in a stand while charging: the USB plug and cable prevented the tablet from sitting flush against a tabletop, the only way to make it work was to keep the Fire right at the edge of a table so the plug and cable could hang free. No longer a problem!

However, because the port is located in a beveled edge, it tilts slightly upward; it will be important to remember this when plugging the USB cable into the port, because failure to tilt the plug and trying to force it in perfectly level could damage the plug or the port. The first time I tried to plug in the USB cable for charging, I tried to push it in the same way as I would with my first-generation Kindle Fire HD, but it wouldn’t go in unless I forced it—and I know that when it comes to cables and plugs, if you have to force it then you’re doing something wrong. A closer look at the port showed me it would be necessary to slightly tilt the plug, and once I did, it slid in easily.

Sorry, You Can’t Use Cases Or Covers — Yet

The only negative I can find in the new exterior design is that none of the Fire cases or covers I already own will work with the KFHD2 (not without covering up the new buttons on the back of the KFHD2, at least), and there aren’t any yet available for sale that will fit this new model.  I’m sure many manufacturers are already hard at work to get something to market in this area though, so I wouldn’t worry about that.

No Mayday, No Camera, No HDMI Port = More Affordable & Family-Friendly

Two things that have been removed in the KFHD2 are the webcam and HDMI port that were there in the original Fire HD. The webcam will now be a feature limited to the upcoming HDX models (front-facing only in the 7″ HDX, both front and rear-facing in the 8.9″ model). HDMI cable connectivity is completely gone from the new Fire line, due to be replaced by a “Fling” screen-sharing feature in the HDX models only as part of a mid-November software update.

Also, the much talked-about Mayday button, which instantly connects you to Kindle Fire customer and tech support, will be limited to the HDX models.

Since I’ve never used the webcam or HDMI port on my first-gen Fire even once, and never had Mayday on my first-gen, I won’t miss any of these items at all. I don’t doubt the changes helped to bring the price of the KFHD2 down, and the lack of a webcam could make parents feel better about getting the new KFHD2 for their young children, too.

It makes sense to have at least one, affordable option without Mayday, for kids, since children might accidentally activate that function. Amazon’s existing, excellent customer support is still there through all the usual means for KFHD2 help, so it’s not as if the lack of Mayday is a major negative. In fact, my KFHD2 happened to ship with a faulty charger. All it took was one call to Amazon Kindle support and a new PowerFast charger is on its way to me, free of charge.

Amazon appears to be positioning the KFHD2 as the perfect, affordable, entry-level tablet for kids and young families, and I think that’s a good idea. $139 is still a considerable amount of money, but it won’t induce quite the same heart attack if it’s lost, stolen or broken as Mom or Dad might get when something happens to Junior’s $600 iPad.

Collections Functionality Is On Its Way

The software update that’s coming in November is coming to the KFHD2 as well as the HDX models, and that means the Collections function so many of us have been waiting for is on its way for the KFHD2.

The HD screen on the KFHD2 is noticeably brighter and sharper than that of my first-gen Fire HD. Here again, some people are saying the new display is darker or “muddy”, but that’s probably because the default brightness setting out of the box is pretty low, probably in order to conserve battery power. Adjust the screen brightness upward, and with the two Fires side-by-side the KFHD2 is clearly the superior viewing experience.

The KFHD2‘s more powerful processor is pretty evident during downloads and web browsing, too. Downloads and webpage browsing are both noticeably faster.

I was only supposed to have the KFHD2 for a limited time, for the sake of trying it out and writing about it, but I like it so much I’ve decided to keep it. I’ll still be getting one of the 8.9″ models (and writing about its features here), but the KFHD2 will likely become my preferred Fire for on-the-go due to its smaller size.