WOPR: War Games (4/5 stars, all ages) is today’s Amazon Free App of the Day. This app is based on the movie WarGames, in which a teen hacker inadvertently gains access to a top secret, military computer.

In Seattle, teenager David (Matthew Broderick) is a lazy but bright teenager that prefers to hack and change his grades in the high-school computer than study.

One day, David’s best friend Jennifer (Ally Sheedy) is with him and he decides to hack into toy company Protovision, seeking new games, and he accidentally connects the War Operation Plan Response system in a computer located at the North American Aerospace (NORAD) at Birmingham using the password Joshua that was the name of the son of its creator, the deceased scientist Stephen Falken.

David challenges the computer to play a Thermo War game between USA and the Soviet Union. Soon he realizes that the computer is playing for real and the United States of America is changing its condition to DEFCON 1 in a game with no winners.
– Written by Claudio Carvalho

The WOPR: War Games app picks up the thread of the movie, providing a version of the NORAD computer system. From Amazon:

Shall We Play A Game? 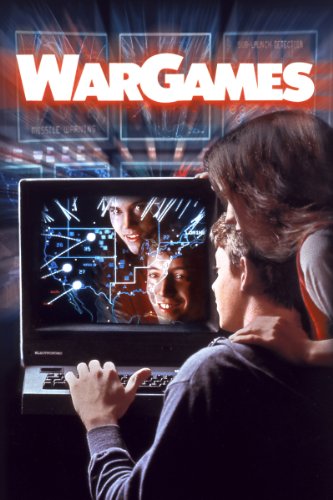 Step into the role of the iconic WOPR computer as you wage intense battles of Global Thermonuclear War against characters from the movie. Take on David Lightman (played by Matthew Broderick), Jennifer Mack (played by Ally Sheedy), McKittrick (played by Dabney Coleman), and others.

Gameplay:
There are four tile types on the board at any given time. Drag your finger over as many similar tiles to create as long of a chain as possible. The longer the chain the bigger the bonus you’ll get or more damage you’ll deal to your opponent.

Tile Types:
Nuke – Damage your opponent
Health – Heal yourself
Money – Gain money to deploy tactics against your enemy
Radar – Fills up your bonus meter. Once the meter’s reaches 100% you get to choose an instant PowerUp

Enemy Tiles:
Your opponents will deploy tiles onto the board in an attempt to damage you and heal themselves. Match enemy tiles with regular tiles of the same type to damage and eventually destroy them. Enemy tiles are denoted by a pulsing crosshair.

Tactics:
Tactics are instant-use items deployable during battle. They do anything from dealing direct damage to your opponent, destroying enemy tiles, or nuking the whole board. They cost money to use (gain money by clearing money tiles). There are 12 unique tactics, each of which has 6 upgradable levels.

Mods:
Mods give passive bonuses and are always active during battle. Their powers range from increasing the amount of money gained each turn, adding to the value of a completed chain, or giving insane bonuses for completing long chains. There are 12 powerful mods and each one has 6 upgradable levels.

WOPR: War Games – get it today, while it’s Amazon’s Free App of the Day!