First things first: why am I talking about iTunes and Apple devices on a site dedicated to Amazon’s Kindle Fire? It’s because many—maybe even most—Kindle Fire owners aren’t taking advantage of all the Fire’s music features because they’re already chained to iTunes and Apple devices for digital music purchases, downloads and management. Nobody wants the headache of having to manage separate media libraries for different devices.

Many would LOVE to free themselves from their iTunes/Apple shackles and find a digital music/media solution that would work seamlessly across all their computers and portable devices, but fear they can’t do it without major hassle and losing a huge chunk of content or functionality. Having made myself a guinea pig for the sake of all of us, I’m now ready to report back and can reassure everyone: it can be done, and without losing anything but the ongoing iTunes nightmare to which we’ve resigned ourselves for far too long. And now that iTunes is about to force a totally redesigned, new and (reportedly) buggy version on us, it’s as good a time as any to make the switch at last.

As Slate’s Tech Reporter Farhad Manjoo says in his article, Won’t Someone Take iTunes Out Back and Shoot It?:

Anyway, so iTunes 11 finally hit the Internet today. If you start downloading it immediately, you might be able to get it up and running by the time the ball drops over Times Square. People always wonder why this is—why a simple music player weighs in at around 90 megabytes and requires many long minutes to install and “prepare” your library before it becomes functional. Don’t ask questions—this is just what you get with iTunes. Each new upgrade brings more suckage into your computer. It makes itself slower. It adds three or four more capabilities you’ll never need. It changes its screen layout in ways that are just subtle enough to make you throw your phone at the wall. And it adds more complexity to its ever-shifting syncing rules to ensure that the next time you connect your device, you’ll have to delete everything and resync. At this point, you shake your fists and curse this foul program to the heavens: iiiiiiiiiiiiiTuuuuuuuuuuunes!!!

Since I’ve been buying my music exclusively from Amazon’s MP3 Store for years now (it’s generally less expensive, and I get the convenience of free Cloud storage and accessibility from all of my household’s Fire devices—plus, it was also easy to import to iTunes), I’ve been very keen to free myself from the iTunes beast as well. But like everyone else, I worried that:

Now that I’ve got a non-Apple digital media player (the Samsung Galaxy Player, 4.5/5 stars, currently priced at $119.99 – $149.99 for the 3.6″ screen model) and have put myself and the device to the test by going without iTunes or my trusty iPod for over a week, I can tell you from personal experience that all my fears were unfounded. There IS a better way, and you CAN free yourself from the monster iTunes has become once and for all!

What Finally Pushed Me Over the iTunes Cliff

If you’ve been using iTunes for any considerable period of years, you don’t need me to tell you that many of us will keep old PCs and laptops clunking along, stuck together with duct tape and paperclips if need be, for as long as possible ONLY to delay the inevitable nightmare of migrating our iTunes libraries to a new machine. That migration always involves hours of time to re-build or re-import your music and media library, plus many hours more of manual cleanup to deal with all the files that didn’t get imported or were imported as duplicates.

I went through that digital music purgatory just a few short months ago, and at the time, decided that since I was in for many, many hours of media library management work anyway, it was as good a time as any to sign up for iTunes Match + iCloud. This service would enable me to upload my entire digital music library to Apple’s iCloud cloud servers, saving me the trouble of regularly backing up, and would (supposedly) make all my digital music available to all my Apple devices simultaneously, without the need for manual syncing.

What Apple didn’t tell me up front was that when you sign up for iTunes Match + iCloud, you can ONLY manage and sync your music from iCloud, you can no longer access your local library files in iTunes. That means that on a touchscreen device, like an iPad, you must re-download anything you want to listen to before you can use it, and on a non-touchscreen device, like my iPod Classic, you must still connect the device to your computer, re-download anything you want to put on the device from iCloud to iTunes (and yes, this creates a duplicate copy on the hard drive where your local iTunes library is/was stored), and THEN copy the content onto the device. Using iTunes Match + iCloud merely inserted a new delay and step in the sync process for me—after making me PAY for the privilege!

Finding out how to turn off iTunes Match + iCloud wasn’t easy, it involved some Googling. But worst of all, turning those services off (and losing the fees I’d paid for them) also meant starting all over with my iTunes library from scratch, just the same as if I were migrating to a new computer! I’d had it, and made up my mind right then that if there was a better way, I would find it. Never again would I be forced to go through this colossal and frustrating waste of time and effort.

Better Music Library Access and Management: I now use Amazon’s Cloud Player for digital music instead of iTunes. Cloud Player runs on the Kindle Fire as well as computers and any portable Android device that can run apps, so I can access and listen to my music on my Fire or computer when I’m at home, or on my Galaxy Player when I’m at the gym, in the car, or otherwise on the go. All I needed to do was invest in an $8 stereo audio-out/aux cable to plug the Galaxy Player into my car stereo.

There’s an Audible app for Android devices too, so I can still listen to audiobooks in the car or gym just like I used to do with my iPod. As an added benefit, I don’t have to download copies of all my audiobooks to my computer and import them to iTunes, then manually copy them to the Galaxy Player, like I used to have to do for the iPod. I just launch the Audible app right on the Galaxy Player, pick the book I want and download direct to the device when I’ve got a wifi connection. Another plus is that when I use the Audible app, no matter which device I choose to use for listening to an audiobook (e.g., the Galaxy Player or Kindle Fire), the file picks up and plays right where it left off the last time I used it. I can switch between devices easily, which is something I could never do when using an iPod for my Audible audiobooks. When I’m done with the book, I can delete it from the device to free up space but my original, purchased copy is still right there in the Audible/Amazon cloud, if I ever decide I want to listen to it again. 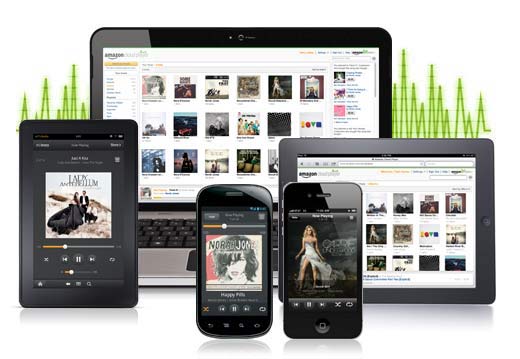 Amazon Cloud Player Premium: Any music you buy from Amazon is stored in Amazon’s Cloud at no extra charge by default, but I already had a huge music library before Amazon even got into the digital music business, and I wanted all of it to be accessible in a single, centralized location, just like I was used to having with iTunes. Luckily, Amazon has its own answer to iTunes Match + iCloud, and it’s called Amazon Cloud Player premium. This service lets me upload all my non-Amazon-purchased music to the cloud and store it there so I don’t have to make local backups anymore, just like with iTunes Match + iCloud. Once my music is in Amazon’s cloud, I can access and stream or download any or all of it from the cloud to any of my household’s computers or Fire devices, as well as to the Samsung Galaxy Player—not just Apple devices, which was the case with iTunes.

What About My iPod Docking Devices?

True, I am letting go of the iPod docking/charging use of the iPod dock clock radios I have in the bedroom and kitchen. However, I’m not losing the functionality. Since I can stream anything from my Amazon Cloud Player music library to any of my household’s Kindle Fires, computers or portable Android devices, I can just prop my Fire up on the countertop in the kitchen to play music there, or use my laptop or Samsung portable player in the bedroom. I can plug the Fire or Samsung player into a wall socket while I’m using it if remaining charge is an issue. I never did use the ‘wake to iPod’ or ‘sleep to iPod’ functions of my docking clock radios anyway, I really wanted them just for the speaker functionality. I can keep using the clock radio in the bedroom for my daily wake up to the radio, same as I always have.

I may treat myself to an Android speaker dock to replace the kitchen clock radio dock at some point, but it’s not a necessity. By the way, I wouldn’t even have to get a dock with a radio because the Galaxy Player has its own radio, built right into the device!

This is just the first in a series of posts about making the switch from Apple/iTunes to Amazon/Android. In upcoming posts, I’ll go into more detail about the Samsung Galaxy Player device and how it stacks up against comparable Apple devices, as well as the specific process involved in migrating away from iTunes and into Amazon’s Cloud Player Premium and handling any iTunes music purchased prior to 2009, with DRM attached.

I’m an especially good test case, because my digital music library is very large and consists of music imported to iTunes from CD, bought from iTunes both before and after the iTunes store turned off DRM in 2009, plus music purchased from the Amazon MP3 store.

I have freed myself from the tyranny of iTunes once and for all, and so can you!

Next up in this series: Samsung Galaxy Player vs. iPod Touch