Minecraft, that world-building, game-making PC sensation has come at last to the world of apps in a Pocket Edition! It was just released 9/13/12, and even though it’s been released at its full retail price of $6.99, it has already accumulated an average review rating of 4.5/5 stars across over 340 reviews.

If you’ve never heard of Minecraft, this excerpt from Wikipedia sums it up pretty well:

Minecraft is focused on creativity and building, allowing players to build constructions out of textured cubes in a 3D world. Gameplay in its commercial release has two principal modes: Survival, which requires players to acquire resources and maintain their health and hunger; and Creative, where the player has an unlimited supply of resources, the ability to fly, and no health or hunger. A third gameplay mode, named Hardcore, is essentially the same as Survival, but the difficulty is locked on the hardest setting and respawning is disabled, forcing the player to delete his or her world upon death. 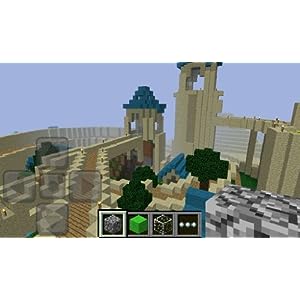 This is one videogame you won’t mind letting the kids play (though plenty of adults are addicted to it as well), because it’s a lot like playing with Lego building blocks: Minecraft provides both a brain and a creativity workout. The player has to plan ahead, and build in virtual three dimensional space. The rating for this app is “guidance suggested”, primarily because very young kids won’t be able to easily master the game controls. Kids as young as 10 are loving it, though. From Amazon:

Imagine it, build it. Create worlds on the go with Minecraft – Pocket Edition

Minecraft – Pocket Edition allows you to build on the go. Use blocks to create masterpieces as you travel, hangout with friends, sit at the park, the possibilities are endless. Move beyond the limits of your computer and play Minecraft everywhere you go.