(April Hamilton provided the eyes and ears for Kindle Nation at today’s blockbuster press conference — you can check out her live tweets here.)

The theme running through today’s Amazon press conference was integration: not in the technological sense, but in the sense that Amazon wants to become so seamlessly integrated with consumers’ lives that we’re using Amazon products and services regularly, and reflexively. Amazon’s strategy to achieve this vision is the same as it’s always been: give the people what they want, at a better price than the other guy, and make content delivery as seamless and hassle-free as possible.

To that end, today Amazon rolled out not only some killer devices, but some killer apps and app improvements as well. 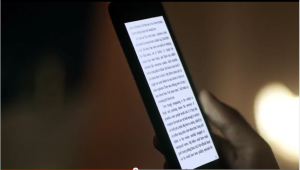 The monochrome Kindle gets a new Paperwhite display, a faster processor, a touchscreen, a front-light feature and battery life of up to 8 weeks — and that ‘s with the front light on all the time. All this and more at a price of just $119.

The Kindle Fire gets a processor upgrade for 40% faster performance, twice the onboard memory and longer battery life. And believe it or not, this souped-up new model is priced at $159: $40 LESS than the previous model!

The new Kindle Fire HD is poised to take on all comers. Available in both 7″ and 8.9″ models and with the 7″ model priced at the original Fire’s $199, these may be the iPad and Nexus killers the pundits have been anticipating. The KFHD comes with a host of features and upgrades, such as front-facing camera, microphone, thinner and lighter form factor, Dolby Dual stereo sound, and a terrific new suite of built- in apps and functionality.

Finally, the star of the show is undoubtedly the new Kindle Fire HD 4G LTE model. It has all the form and feature advantages of the 8.9″ KFHD, but it adds 4G LTE connectivity for just $50 a year! Take THAT, every other tablet in the world!

Stay tuned, we’ll be posting more details here over the next few hours.