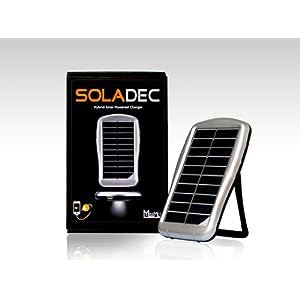 Don’t you just hate it when you’re at the beach, camping, on a plane or somewhere else where electric outlets aren’t so handy, and your Fire battery runs out?  You need never experience that frustration again, thanks to these terrific, green solar chargers that generally work with any USB device—that means you can power your Fire, smart phone, handheld gaming devices, iPod and more!

Beginning at the high end, the SolaDec will set you back $99.25, but it’s also the best-reviewed solar charger of the bunch with an average of 5/5 stars across 18 reviews. Reviewer Mark Lundqvist says:

11/18/11 – …Being a gadgets guy, I’ve had my share of solar chargers, none of which impressed me but after using the Soladec for four days in the wild, I can honestly say my faith in solar powered chargers is renewed!

Usage – After charging it in the sun all day, I still had enough juice to fully charge my iphone4, my nephews PSP, and had enough to use the built-in light for a few hours around at night. The higher output solar cell is a drastic difference to cheaper made-in-china chargers that can barely charge your phone halfway.

Compatibility – As soon as I got the Soladec, I immediately tested it with all the devices we would bring, ( which all worked): PSP, iPhone4, Kindle3, Garmin GPS, and an ipod nano. The Soladec is by far the most functional solar powered charger that actually works and would gladly recommend it to anyone!

***UPDATE*** 3/29/2012
After a few months of rough trips through desert and mountains, glad to report that it still runs like its fueled by plutonium and fairy dust…its a must-bring for our camping trips being our primary light and power source at night…after a some tossing around…it still works just as well as it did on the first day. Seeing ours, a few of our frequent camping friends have even purchased one and i’m sure they too will gladly recommend it! 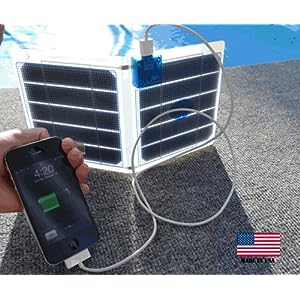 The sCharger-5 is another popular unit at the high end of the price range, priced at $139.95 and carring an average review rating of 4.5/5 stars. This unit charges a little more quickly than the SolaDec, and is powerful enough to allow you to use your device while it’s charging. It’s also designed to be water and weather resistant, so it’s probably the better pick if you need a charger you can take outdoors or near water on a regular basis. Reviewer Isaac says:

I have been trying out different solar USB chargers for over a year and the sCharger-5 is the best so far! It is thin, convenient, lightweight, has a built-in universal USB port for any device, and folds up to fit in a small bag or large pocket. You have to understand that Solar power does fluctuate throughout the day and is most powerful between 11am and 2pm, so you need a very powerful charger like this one that can charge up your phone or any other USB device in a few hours, especially if there are lots of trees around you and the sun only shines through briefly. I got mine about a year ago and it still keeps working rain, shine, or falling off my bicycle!

It is the only way I charge my Ipod now. I bought a CD case and take this solar charger with me where ever I go. It is high powered and charges at the same rate as plugging into a wall socket. If a shadow or interruption stops the charge, it resets itself without having to unplug and replug it. FANTASTIC! 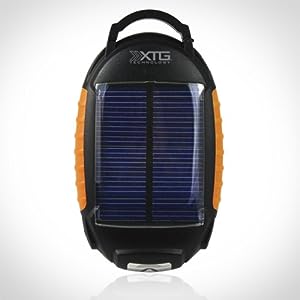 The XTG Solar Portable Battery Pack with Flashlight and Lantern is normally priced at $69.99, but is currently on sale for $34.99, and has an average review rating of 4/5 stars across 17 reviews. Reviews are a bit more mixed on this lower-priced charger, and the consensus seems to be that while it’s great as an “in a pinch” charger, it may not be powerful enough for regular, ongoing use as a power source. Reviewer My2Cents says:

Bought this for a 5 day backcountry ski trip. The XTG did get a recharge in the sun, and it did recharge my phone somewhat. I only give it 3 stars because it does not have enough power to recharge my phone to even 50%. So it works, and I will use it again, but it was not quite as successful as I hoped.More positively, the built in flashlight works great and can be used for a surprisingly long time. I would give that function 5 stars, but my main purpose was recharging my phone. 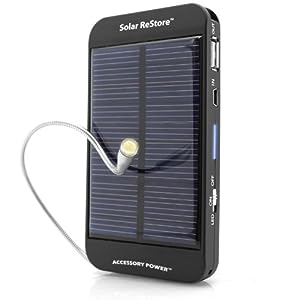 Finally, the ReVIVE Series Solar ReStore External Battery Pack, normally priced at $49.99, is currently on sale for $27.99 and has an average review rating of 4/5 stars across 114 customer reviews. Reviewer Amy K. Litwiler says:

The price was right for what it does. I didn’t read [the instructions closely] enough and thought that it would actively charge from the solar cells. Once they are depleted, you have to let it fully recharge (either on its own or with an outlet) or it will actually DRAW power from whatever you think you might be charging with it. We went from a phone with weak power that we thought we were charging to a completely dead phone. After I re-read the instructions….this is by design. Just a word of caution to the buyer. Nice little device. You should get one of those sunglasses bags to keep it from scratching when you throw it in your backpack. 🙂

I have been looking for either a solar or hand cranked charger for our iPhones. This seemed like the best option and it seems to do the job. Although the description doesn’t specifically say that it will charge an iPhone it charged mine just fine. I just wish that the item description said that you can only give a 50% charge to a phone off of the battery, once the battery is fully charged…

As soon as I got the charger I plugged it into the wall adapter to charge it up to 100%. It arrives with a 50% charge according to the LED lights on the back. And it didn’t take too long to get up to full charge. I then plugged my iPhone in…[it charged] from half to full in about 45 minutes. The charger had dropped to 50% so I set it in the window in direct sunshine and charged it back to full capacity in about 90 minutes. So on the whole I am happy with the charger and the LED light on the side is a nice bonus. It is pretty bright and may come in handy when the batteries in my flash lights die.

So whatever your budget and needs, whether you’re trying to reduce your carbon footprint or just avoid getting caught without power when you’re out and about, one of these units should be a fit.