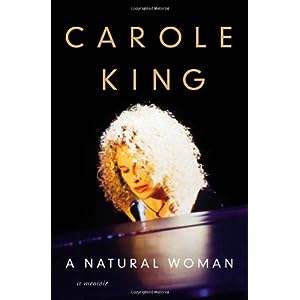 Released just today, Carole King’s Memoir A Natural Woman is a must-read for fans, and recommended for anyone else who would be interested in reading about the tumultuous life of the sometimes needy and even battered woman who nevertheless blazed trails for generations of creative women to come.

In her review for USA today, Elysa Gardner says:

As an artist, Carole King helped pave the way for generations of creatively autonomous women. As a woman, she long harbored a desperate need for male affection and affirmation, enduring troubled and even abusive relationships.

That dichotomy is the crux of A Natural Woman … the candid, endearingly chatty memoir that traces King’s rise from a precocious Brooklyn girl to one of the world’s most beloved singer/songwriters.

In her teens and early 20s, she wrote the music for such enduring hits as the Aretha Franklin classic alluded to in the title and The Shirelles’ Will You Still Love Me Tomorrow. King wasn’t yet 30 when Tapestry established her as a superstar in her own right in the 1970s. It became one of the best-selling albums of all time…

There are leisurely, detailed accounts of recording sessions, and of collaborations, friendships and memorable encounters with fellow icons such as John Lennon and James Taylor.

Amazon is offering King’s most successful and best-loved album of all time, Tapestry, as a $5 MP3 download this month as well.