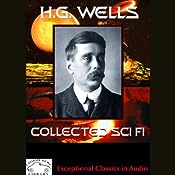 If you like that joke then you’re probably a fan of science fiction, and one of the all-time classics of the genre is H.G. Wells’ The Time Machine. While there are 19 productions of the story available on Audible, perhaps the best value is H.G. Wells Collected Science Fiction: The Time Machine & Stories of the Unusual, which is the only one to offer an entire collection of H.G. Wells’ work.

This version carries an average reviewer rating of 3.9/5 stars across 86 ratings, and has been particularly singled out by reviewers for the high quality work of its narrator, Ralph Cosham. On Audible.com, reviewer Jefferson says:

It’s hard to beat listening to H. G. Wells’ classic and influential novella The Time Machine plus several of his better-known interesting short stories, all ably read by the dependable Ralph Cosham. The Time Machine is a fascinating and strangely affecting work, so imaginative and stimulating in its critique of the division between the working classes and elite ruling classes. Beyond this, the dizzying time scale and the vision of the far-future earth near the death of the sun impress one like a vivid, beautiful, and terrible nightmare.

The other stories included are as follows:

Some of the stories are inventive, some poignant, and some are even humorous. If you’ve yet to familiarize yourself with Wells’ canon in book form, this is an excellent starting point. It’s also a great way to get teens who are into sci fi but reluctant to read hooked on some quality literature.