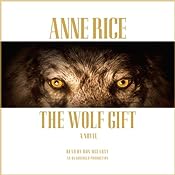 If you enjoyed Anne Rice’s The Vampire Chronicles or Lives of the Mayfair Witches series, you’ll want to check out her latest offering, The Wolf Gift.

Many of her fans were puzzled by Rice’s 2008 foray into historical religious fiction in Christ the Lord: Out of Egypt: A Novel, which received mixed reviews. But with The Wolf Gift Rice returns to gothic horror/romance form with a modern tale of a man who metamorphoses into a stately, powerful and tragic creature more like the Beast from Cocteau’s film adaptation of Beauty and the Beast than a canine monster that runs on all fours. From Amazon:

A daring new departure from the inspired creator of The Vampire Chronicles (“unrelentingly erotic . . . unforgettable”—The Washington Post), Lives of the Mayfair Witches (“Anne Rice will live on through
the ages of literature”—San Francisco Chronicle), and the angels of The Songs of the Seraphim(“remarkable”—Associated Press). A whole new world—modern, sleek, high-tech—and at its center, a story as old and compelling as history: the making of a werewolf, reimagined and reinvented as only Anne Rice, teller of mesmerizing tales, conjurer extraordinaire of other realms, could create.The time is the present.The place, the rugged coast of Northern California. A bluff high above the Pacific. A grand mansion full of beauty and tantalizing history set against a towering redwood forest.

A young reporter on assignment from the San Francisco Observer . . . An older woman welcoming him into her magnificent family home that he has been sent to write about and that she must sell with some urgency . . . A chance encounter between two unlikely people . . . An idyllic night—shattered by horrific unimaginable violence, the young man inexplicably attacked—bitten—by a beast he cannot see in the rural darkness . . . A violent episode that sets in motion a terrifying yet seductive transformation, as the young man, caught between ecstasy and horror, between embracing who he is evolving into and fearing what he will become, soon experiences the thrill of the wolf gift.

As he resists the paradoxical pleasure and enthrallment of his wolfen savagery and delights in the power and (surprising) capacity for good, he is caught up in a strange and dangerous rescue and is desperately hunted as “the Man Wolf” by authorities, the media, and scientists (evidence of DNA threatens to reveal his dual existence) . . . As a new and profound love enfolds him, questions emerge that propel him deeper into his mysterious new world: questions of why and how he has been given this gift; of its true nature and the curious but satisfying pull towards goodness; of the profound realization that there may be others like him who are watching—guardian creatures who have existed throughout time who possess ancient secrets and alchemical knowledge. And throughout it all, the search for salvation for a soul tormented by a new realm of temptations, and the fraught, exhilarating journey, still to come, of being and becoming, fully, both wolf and man.

It has been years since I’ve read an Anne Rice novel, and I was initially hesitant about this one. However, the premise sounded interesting, so I ordered it anyway just out of curiosity. I’m very glad that I did. I started this book day before yesterday, but late in the evening , and went to bed only a couple of chapters in. I picked it up again yesterday afternoon – and by the time I realized that it was far past my bedtime, I was almost finished and NEEDED to see how it ended.

The Wolf Gift is available in both Kindle and Audible audiobook formats.