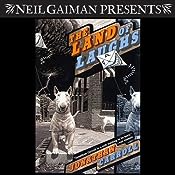 If you’re a fan of the novels, short stories and essays of Neil Gaiman, perhaps you’ve wondered what Neil Gaiman is a fan of, or what his early literary influences might have been. Wonder no more, because Audible has tapped Gaiman to produce a library of his favorites in audiobook form. These are all new recordings, all featuring newly-created Forewords from Gaiman himself, explaining why he chose each work for inclusion and what he thinks is special about it. From Audible, the Neil Gaiman Presents Collection:

“These are terrific books by great authors that I handpicked from the Audiobook Creation Exchange (ACX), matched up with just the right narrators and personally produced. I hope you’ll enjoy them as much as I do. Check them all out here…”–Neil Gaiman

The first title in the collection is White Apples.

Gaiman says: “In his performance, Victor Bevine manages to convey three aspects of Vincent’s personality: the womanizing hedonist he was in life, the now-dead fellow trying to control his rising panic who realizes his one-night-stand knows today is his mother’s birthday; and, ultimately, the loving, heroic family man who undertakes a big task for the sake of his unborn son and – incidentally – the rest of humanity. That’s a tall order for any narrator, but I wasn’t surprised when the accomplished actor Victor Bevine made the character come alive.”

Vincent Ettrich, a genial philanderer, discovers he has died and come back to life, but he has no idea why, or what the experience was like. Gradually, he discovers he was brought back by his true love, Isabelle, because she is pregnant with their child – a child who, if raised correctly, will play a crucial role in saving the universe.

But to be brought up right, the child must learn what Vincent learned on the other side – if only Vincent can remember it. On a father’s love and struggle may depend the future of everything that is.

By turns quirky, romantic, awesome, and irresistible, White Apples is a tale of love, fatherhood, death, and life that will leave you seeing the world with new eyes.

The author of White Apples is Jonathan Carroll, apparently a favorite of Gaiman’s since the collection includes another Carroll novel: The Land of Laughs.

A few words from Neil on The Land of Laughs: “I chose The Land of Laughs for Neil Gaiman Presents because I love Jonathan Carroll’s books and want to bring them to as wide an audience as possible. I suspected the character of Thomas Abbey would be both a challenge and an opportunity for the right narrator. Edoardo Ballerini conveys a certain wistfulness and vulnerability underneath Abbey’s grumpiness.”

Thomas Abbey is a man stuck in a rut. An English teacher in a small Connecticut prep school, Abbey is in a crisis. His career is unfulfilling, he has no social or love life to speak of, and he cannot break out of the shadow of his famous father, the actor Stephen Abbey. To kick-start his life, he takes a sabbatical to work on a biography of his favorite writer, Marshall France. France’s books were the only thing that kept Abbey sane during his childhood, and though he was renowned for his lyrical and imaginative children’s books, nearly nothing was known about the writer’s life.

Although Abbey has been warned that France’s daughter, Anna, has blocked all previous attempts at her father’s biography, he and Saxony Garder – an intense woman also obsessed with France’s life – head to Galen, Missouri, with high hopes of breaking down Anna’s resistance. They are surprised to find Anna the soul of small-town hospitality and quite excited about Abbey’s proposal – even eager to get the project finished as soon as possible.

Even stranger than Anna’s behavior is the town of Galen itself. On the surface, all is as a small Midwestern town should be. But the people of the town seem to know what their future holds – freak accidents and all – down to the hour and are as eager for Abbey to finish the biography as Anna is.

Check out these audiobooks, and the full Neil Gaiman Presents Collection, on Audible.