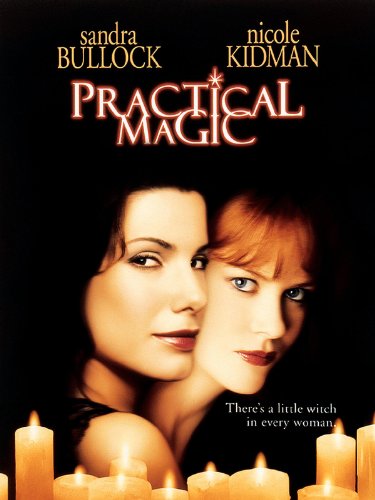 Today in the Prime Video spotlight, we present Amazon Prime Instant Videos featuring modern day witches, both with a mix of drama, comedy, romance and a touch of the supernatural, and both based on books of the same titles.

First up is Practical Magic, starring Sandra Bullock and Nicole Kidman. It’s currently free to stream for Prime members, $2.99 to rent for others, and $9.99 to buy the digital download. From IMDB:

Sally and Gillian Owens have always known they were different. Raised by their aunts after their parents’ death, the sisters grew up in a household that was anything but typical–their aunts fed them chocolate cake for breakfast and taught them the uses of practical magic. But the invocation of the Owens’ sorcery also carries a price–some call it a curse: the men they fall in love with are doomed to an untimely death. Now adult women with very different personalities, the quiet Sally and the fiery Gillian must use all of their powers to fight the family curse and a swarm of supernatural forces that threatens the lives of all the Owens women. Written by WARNER BROS.

If you prefer books to movies, check out the Alice Hoffman novel in Kindle format or Audible audiobook format.

Another movie about magical women in a small, conservative community is The Witches of Eastwick, and it’s also currently available for free streaming to Prime members, $2.99 to rent for others and $9.99 to buy the digital download. It’s based on the John Updike novel of the same name (available in Kindle and Audible Audiobook editions). From IMDB: 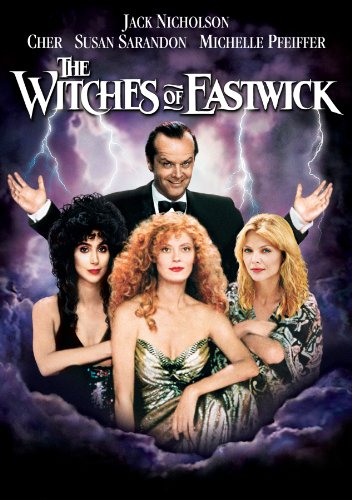 All three previously married but now single, best friends sculptress Alex Medford, cellist Jane Spofford and writer Sukie Ridgemont are feeling emotionally and sexually repressed, in large part due to the traditional mores overriding their small New England coastal town of Eastwick. After their latest conversation lamenting about the lack of suitable men in Eastwick and describing the qualities they are looking for in a man, mysterious Daryl Van Horne and his equally mysterious butler Fidel arrive in town. Despite being vulgar, crude, brazen and not particularly handsome, Daryl manages to be able to tap into the innermost emotions of the three friends, and as such manages to seduce each. In turn, the three women blossom emotionally and sexually. After an incident involving one of the town’s leading citizens, the ultra conservative Felicia Alden, the three women begin to understand how and why Daryl is able to mesmerize them so fully…   Written by Huggo

Here’s a fan favorite scene from the movie (contains strong language), in which the ladies try to free themselves from the spell of Darryl Van Horne once and for all as Darryl gives a hilarious speech about his “woman troubles” to a horrified church congregation.