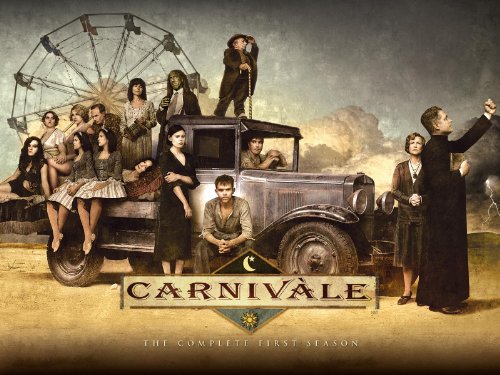 Carnivale is a television series that ran from 2003-05 on HBO. The brief description of the show given on IMDB is, “During the Great Depression, an Oklahoma farm boy and a charismatic minister learn that they are key players in a proxy war being fought between Heaven and Hell,” but that one-liner doesn’t do this pithy, mystical, period drama justice.

Following the death of his mother from consumption in a bone-dry farm in the midwest, Ben Hawkins (played by Nick Stahl) is taken in by a traveling carnival whose mysterious leader, referred to only as “Management”, has redirected the troupe’s path to ensure it would cross that of Hawkins. Management knows Hawkins possesses a power over life and healing, just as there are others in the carnival with gifts of clairvoyance, telepathy, channeling and the ability to see into the future or distant past.

In his nightmares Hawkins is sometimes pursued by a dark spirit, and other times seems to be the dark spirit. He comes to learn bits and pieces about his father, a man with past connections to the same carnival, who was viewed by many who knew him to be a fearsome and altogether evil man.

Meanwhile, out on the California coast, Brother Justin Crowe (Clancy Brown) and his perhaps too-devoted sister Iris (Amy Madigan) are establishing a new church. Justin has had visions of himself at the head of a large and mighty congregation, and is only too happy to welcome the displaced farmers and scattered groups of starving families that come stumbling toward Justin’s offers of food, fellowship and useful purpose. Justin sees himself as a holy man, put on Earth to do the Lord’s work, yet his darker inclinations sometimes peek through the surface of his serene, devout countenance. At such times, sister Iris is always there to patch over the cracks in his smooth facade. The murky story of how he and Iris came to this juncture in life reveals a hidden past that’s fast catching up to the outwardly respectable pair.

When Hawkins and Brother Justin begin having dreams and waking visions of one another, as Management presses the carnival ever westward despite the rest of the troupe’s misgivings, it becomes clear the two men are fated to face one another in a reckoning that will have repercussions for the lives and souls of all they have touched. But in this showdown between good and evil, it’s difficult to tell which is good and which is evil, especially when Hawkins and Crowe themselves don’t seem to know for certain.

If you’re a fan of supernatural thrillers, historical drama, stories about battles between good and evil, theology, theosophy, ghost stories, stories about the occult or based in mythology, Carnivale will not disappoint. Its dense, rich tapestry blends elements of all these things with top-notch production values and equally stellar performances. While there’s plenty to appreciate just on the surface of this historically-accurate tale of desperate people scraping out their lives in desperate times, even now, many years after the show prematurely ended its run, vibrant fan communities and ongoing discussions of the show’s deeper themes and meaning persist.

Note that this show is intended for mature audiences only.

Season one of Carnivale is available for purchase in digital download form in both standard definition (SD) and high definition (HD). SD episodes of season one can be purchased for $1.99 each, and HD episodes for $2.99 each. The entire first season in SD is currently $18.99, in HD $28.99. The second (and final) season is only available in HD. Individual HD episodes from season two can be purchased for $2.99 each, and the entire second season is currently available in HD for $28.99. Both seasons of the show can also be purchased on DVD (currently priced at $46.99).