Beyond the Great River (People of the Longhouse Book 1) 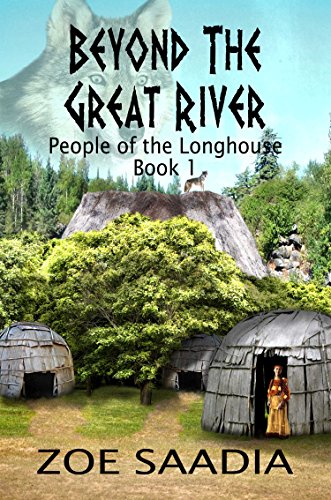 Text-to-Speech and Lending: Enabled
Don’t have a Kindle? Get yours here.
Here’s the set-up:
They felt she was too spirited, too forward, too boyish, not as feminine and as graceful as a young woman should be. Their frowns followed her like a cloud, but she didn’t care. Other girls may have worked happily, danced beautifully, or sewn themselves pretty dresses, but they could not climb or run or swim as well as she did, the silly, giggly, empty-headed creatures that they were.

The entire village may have been frowning at her, but when she spotted the enemy forces camping under the Sacred Hill, they had no choice but to listen.

Okwaho knew they were being watched. Whether by spirits or a wandering local, he could not ignore the feeling of the wary, frightened, hate-filled eyes staring out of the forest, burning his skin. But of course! Of course, the local woods distrusted them. He and his people were invaders, not coming to trade or engage in other peaceful dealings, but to raid these settlements. The enemies from the lands of the rising sun were bad, evil, impossible to understand. And yet…

And yet, when the urge to prove himself lent him enough words to convince the leader of their party to send him and his friend on the mission of scouting the suspected hill, he could not have imagined what consequences this deviation from the well-planned road would lead them all into, the attackers and defenders alike.
5 Star Amazon reviews:
“This is a beautiful and well-written portrayal of two Native American tribes in the fourteenth century.“
“Another wonderful book by Zoe Saadia. A journey through the historical times, people, and cultures of different societies. The book makes you connect with the people and their struggles.“
Enjoy Zoe Saadia’s Books? Tell us Why and Win a Free Book!