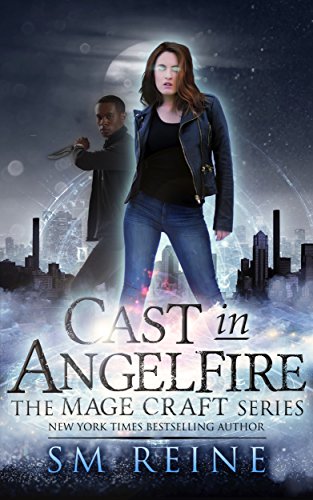 She’s the teenage daughter of Metaraon, the Voice of God. And now it’s time for her to take over the family business.

Nineteen-year-old Marion can’t remember anything before waking up at Mercy Hospital. All she knows that a lot of people want to kill her. And her would-be assassins are not human…

Faeries are real. So are vampires and angels.

They all want Marion dead.

Surrounded by enemies, Marion turns to Lucas Flynn: a mysterious doctor as good with a gun as he is with a scalpel. He fights like a demon but claims that he’s human. And he’s hellbent on protecting Marion.

Lucas claims that Marion is a half-witch, half-angel mage with terrifying powers that could crack the world. But Marion can’t remember how to cast magic any more than she can remember where she comes from.

Marion must find her identity and her power…before the forgotten sins of her past catch up with her.

This series is urban fantasy romance unfolding over multiple books with an eventual happily ever after. It features some violence, mature language, and sexual references.

“S.M. Reine has literally built an entire universe for her characters and the way she has done so is brilliant. This book is engaging, exciting and fans will love the continuation of the stories for characters they have come to adore.” ★★★★★5 star Amazon review