Hell to Pay (What Doesn’t Kill You, #7): An Emily Romantic Mystery 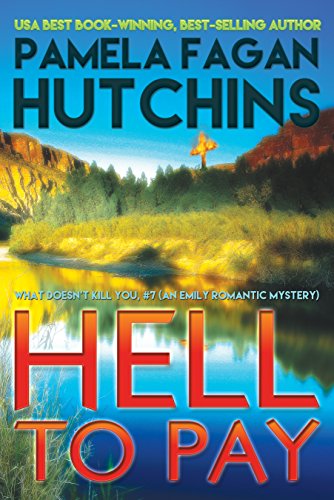 A pulse-pounder full of humor and heart, the latest in the What Doesn’t Kill You romantic mystery series.

Big-haired paralegal and former rodeo queen Emily has her life back on track. Her adoption of Betsy seems like a done deal, her parents have reunited, and she’s engaged to her sexy boss Jack. Then client Phil Escalante’s childhood buddy Dennis drops dead, face first into a penis cake at the adult novelty store Phil owns with his fiancée Nadine, one of Emily’s best friends. The cops charge Phil with murder right on the heels of his acquittal in a trial for burglarizing the Mighty is His Word church offices. Emily’s nemesis ADA Melinda Stafford claims a witness overheard Phil fighting with Dennis over a woman. Before he can mount a defense, Phil falls into a diabetic coma, leaving Nadine shaken and terrified. Meanwhile Betsy’s ultra-religious foster parents apply to adopt her, and Jack starts acting weird and evasive. Emily feels like a calf out of a chute, pulled between the ropes of the header and the heeler, as she fights to help Phil and Nadine without losing Betsy and Jack.

See why Pamela’s novels have won contest after contest.

If you like Sandra Brown or Janet Evanovich, you’re going to love Pamela Fagan Hutchins. A former attorney/investigator and a native Texan from Amarillo who spent ten years in the Caribbean and childhood vacations in New Mexico, Pamela splits her time between a little place called Nowheresville, TX and the frozen north of Snowheresville, WY.

“Clear your calendar before you pick it up because you won’t be able to put it down.” —Ken Oder, author of Old Wounds to the Heart

“Full of heart, humor, vivid characters, and suspense. Hutchins has done it again!” – Gay Yellen, author of The Body Business

“Everything about it shines: the plot, the characters and the writing. Readers are in for a real treat with this story.” — Marcy mcKay, author of Pennies from Burger Heaven

“Hutchins is a master of tension.” – R.L. Nolen, author of Deadly Thyme