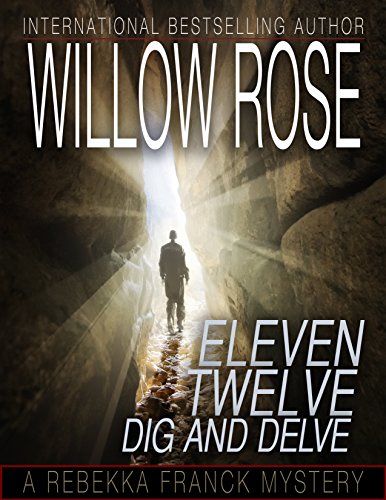 – Learn More
Text-to-Speech and Lending: Enabled
Don’t have a Kindle? Get yours here.
Here’s the set-up:
It’s the stuff of a living nightmare…
Another bone-chilling Mystery from Best selling Author Willow Rose.

Everybody hates Mondays. This Monday is particularly bad for the residents on Blegevej in the Northern part of Denmark. Just before eight o’clock Monday morning, the entire neighborhood sinks into the ground in a matter of seconds when a giant sinkhole opens up underneath it.

Rebekka Franck is visiting a dear friend when she is swallowed up by the hole and ends up trapped inside a limestone mine. Together with the surviving residents from the neighborhood, she tries to get by underground while waiting to be rescued. When the body of one of the survivors turns up inside the mines, they suddenly know that not only do they face starvation and thirst, they also have a killer among them.

Eleven, Twelve…Dig and Delve is the sixth book in Willow Rose’s internationally bestselling series about the Danish reporter Rebekka Franck.

5-star Amazon reviews:
“This is edge of your seat suspense! The best Rebecka Franck yet!“
“This was one amazing story of determination, courage and the intense will to survive. Willow Rose is a truly fabulous author.“