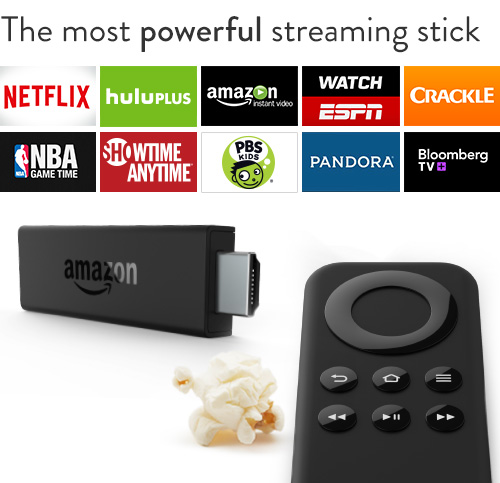 Today Amazon is announcing the upcoming release of its new Fire TV streaming stick, positioned to compete against Google’s Chromecast streaming stick, but with some notable upgrades. More on that later in this post.

First things first: Prime Members can pre-order at 52% off the regular price!

What it is, how it works

The Fire TV Streaming Stick is a very small piece of technology that looks a lot like a USB flash drive, but is designed to plug into one of your HDTV’s HDMI ports to allow instant access to not only Amazon Instant Videos, but other streaming video services like Netflix, Hulu+, Showtime Anytime and more. You simply change your TV’s input setting to the HDMI port where the Fire TV stick is plugged in to use it. This is usually done by pressing the “Input” button on your TV/satellite remote control until the desired HDMI port comes up, then selecting it.

Since the Fire TV Streaming Stick is an Amazon product, it also provides instant access to your Amazon Music Library (if you have one) and/or Amazon Prime Music (if you’re a Prime member). 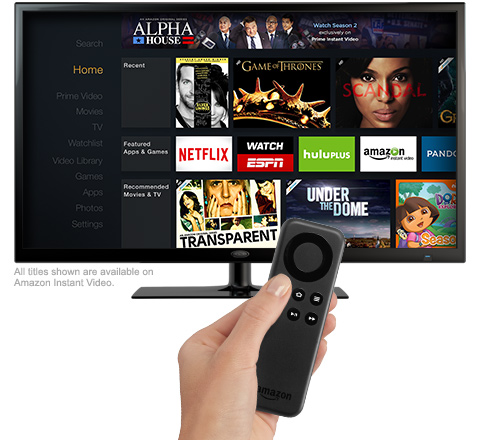 Finally, like the Roku and many other streaming devices, it also provides access to play games on your TV using the included remote control. According to Amazon, this little streaming stick provides all the same functionality as the Fire TV Streaming Box with the exception of voice recognition, which requires the use of the free Fire TV Remote App (currently available for Android devices only, with an Apple version coming soon) or a separate purchase of the Voice Remote for Amazon Fire TV and Fire TV Stick.

Fire tablet owners: the Fire TV Streaming Stick lets you “Fling” whatever you’re watching on your Fire to your TV!

Remember that “Fling” feature that was rolled out with the 2013 Fire tablet line, but which most of us never quite figured out how to work because it was only available with certain TV models? If you get the Fire TV Streaming Stick you can now use that “Fling” technology with ANY television set that has the Fire streaming stick plugged into one of its HDMI ports. From Amazon:

Use your iOS or Android device to fling music and movies to your HDTV—and control playback—from apps like YouTube and Spotify. Or, share movies, TV shows, music, and photos from your compatible tablet or phone with everyone in your living room using display mirroring. What you see on your Fire OS or Android device is exactly what you’ll see on your big screen. 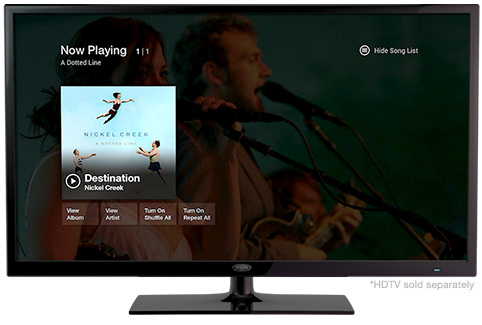 How it’s better than Chromecast or Roku streaming sticks

In short, it’s got a dual core processor where those other sticks only have single core processors, meaning that it’s going to perform a lot better, and it’s got MUCH more memory (1GB flash memory for the Fire Streaming Stick vs. 512MB for the competitors, 8GB on-board memory vs. 2GB for the Chromecast and 256MB for the Roku) than the competition, which also means better performance and more storage space for game save files.

Memory matters because streaming video requires a certain amount of “buffering”, or temporary downloading, to run smoothly. A faster processor means the buffering can happen more quickly, and more flash and on-board memory means more content can be buffered, all of which leads to smoother playback and fewer interruptions.

Also, it allows you to sync and view your personal photos and videos from all your devices and Amazon’s Cloud storage.

A Note From Your KF on KND Editor: Why I’ve ordered this, even though I already have a Roku 2

Once I’d checked out the specs, I did not hesitate to order a Fire TV Streaming Stick even though I already have a Roku 2 streaming box. Here’s why.

1. The Roku has very little on-board or flash memory.
Performance is sometimes an issue when I’m streaming videos through my Roku box, especially if anyone else in the house is doing anything demanding on our home wireless network (e.g., downloading or uploading large files, watching streaming video on a computer, etc.). 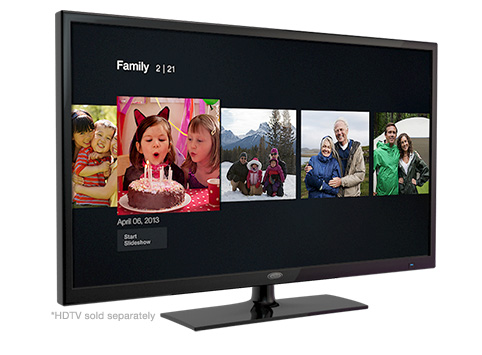 With the Roku, I’m always going through a middle man to watch Instant Videos or listen to digital music. Roku provides “channels” for those two functions, but because the Roku was not designed or manufactured to Amazon’s specifications, it hasn’t been optimized specifically to run those two “channels” as easily, smoothly and quickly as possible.

Sometimes the video or song I want to listen to won’t load on the first attempt via my Roku, and I have to re-try. It’s a minor thing, since the content will almost always load eventually, but it’s still an annoyance and I expect better from the Fire TV Streaming Stick.

3. I don’t care about the voice recognition function.
The Fire TV Streaming Stick doesn’t come with voice recognition technology built in, you have to use the free app on a mobile device or order a separate, special remote for that, but since it’s not a feature that matters at all to me I’ll be just fine without it.

4. One less gadget on the shelf.
Since the Fire TV Streaming Stick plugs right into the HDMI port on the TV, there’s no little box I’ve got to find shelf space for near the TV.

It used to be a real dealbreaker for me, but over the past few months the quality and reliability of HBOGO has really gone down. HBO used to offer a LOT more content via HBOGO than was available on-demand via the regular satellite channels, and the HBOGO app used to be very stable and reliable. Lately, it seems like half the time it won’t load at all via my Roku and when it does, the content selection is only marginally better than what I can get via my satellite box (with a lot less hassle). Where I used to watch streaming content via HBOGO very frequently, a couple times a week or more, now I find I rarely even bother to check its listings.

Finally, since Amazon recently inked a new deal with HBO you’ll find a lot of past HBO content is currently part of the Prime catalog.