Hearts of Valor (A History With Heart Collection) 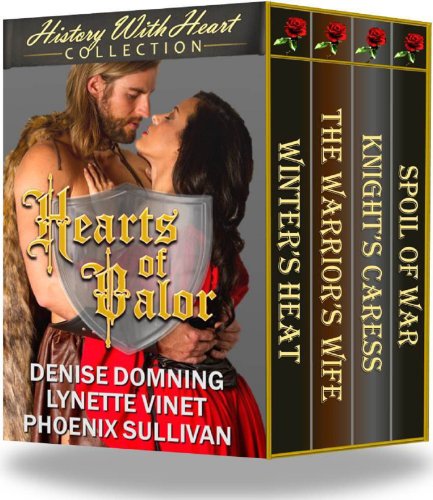 4.3 stars – 23 Reviews
Kindle Price: 99 cents
Text-to-Speech and Lending: Enabled
Don’t have a Kindle? Get yours here.
Here’s the set-up:

Lose yourself in the age of knights and kings, ladies and lovers. Whether you take your history straight, with a healthy dose of romance or a feather-light touch of fantasy, you’ll find it here, with HEAs guaranteed for all.

4 full-length books — special bundle available for a limited time only! And find more 99¢ box sets and single titles from Steel Magnolia Press right here in the Amazon store at: smarturl.it/smp99c

WINTER’S HEAT (The Seasons Series, Book #1) – Denise Domning
A powerful baron forced to marry for want of an heir. A woman’s expectation to rule an abbey torn from her. Now, a tide of treachery rises around them and their only hope is to trust, to cherish and to love unconditionally. 1994 winner of Romantic Times’ “Best First Historical”
____________________

THE WARRIOR’S WIFE (The Warrior Series, Book #1) – Denise Domning
Two warring families, one widow who has forgotten her family’s hatred, one powerful knight determined to reclaim his family’s castle and a wife to rule it beside him. No one will stop him — not her father, his king or the lady herself.
____________________

KNIGHT’S CARESS – Lynette Vinet
Though conquering Normans had taken his keep and lands, Tedric of Woodrose swore revenge on those who’d killed his father and kidnapped his sister. And he knew just the way. He would take his own captive — Amberlie de Fontaine, the brown-eyed Norman beauty who was now lady of his former keep. And once he had stolen her away, he would not scruple over stealing a fiery kiss or two from this dark and enchanting hostage…
____________________

SPOIL OF WAR: AN ARTHURIAN SAGA – Phoenix Sullivan
Elsbeth of Olmsbury desires nothing beyond helping her father run his dukedom — until his forces are overwhelmed, his castle torched and Elsbeth seized for the invading king’s personal spoil. Leodegrance desires only to make Elsbeth his consort in Cameliard even as he marches to unite the wild isle of Britain under Roman rule. Together, they are destined to create history.