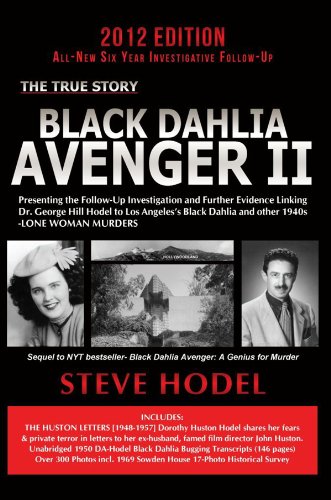 TV crime mystery shows make it look like there’s no crime or missing persons case that can’t be solved. Yet countless such cases abound. These recent books have their own theories on some of the top mysteries of the twentieth century.

In Black Dahlia Avenger II, bestselling author and veteran LAPD homicide detective Steve Hodel presents his six-year follow-up investigation [2006-2012] into the Los Angeles B lack Dahlia and other serially connected 1940s Lone Woman Murders. After the 2003 publication of his NYT bestseller and MWA Edgar nominated true-fact crime book, Black Dahlia Avenger: A Genius for Murder, and receiving a “CASE SOLVED” legal opinion from many of LA’s top law enforcement officials-which included a then active Head Deputy District Attorney and LAPD’s Chief of Detectives-Hodel didn’t stop there. In this investigative sequel he presents his careful deconstruction of the Dahlia Myth-exposing and correcting the Black Dahlia Murder’s Three Greatest Urban Myths:

Some of BDA II’s new investigative findings:
• The obtaining of Dr. George Hodel’s full DNA PROFILE which can now be made available for law enforcement testing and comparison to multiple cold case unsolved crimes.

• Discovery of the Hollywood residence where the BLACK DAHLIA MURDER was committed along with physical evidence connecting the killer to the house and to the vacant lot where he later transported and posed the victim’s surgically bisected body.

• Identification of “The Baron,” George Hodel’s house-guest and accomplice overheard by detectives discussing “crimes and payoffs” on the 1950 DA bugging tapes.

• New expert medical testimony and evidence photos proving – “A Doctor did it.”

• THE HUSTON LETTERS – Personal correspondence between famed film director, John Huston and his ex-wife, Dorothy Huston Hodel [the author’s mother] covering the years 1948-1957. In these private letters Dorothy shares with John the day to day personal fear and terror she was experiencing living with George Hodel, as the doctor threatened her and the children with physical harm in the months just prior to his fleeing the country.

• A World Class Surrealist Photographer reveals his firsthand knowledge of the crimes.

• Over 300 photographs and crime exhibits including the 1969 Sowden House 17-Photo Historical Survey. 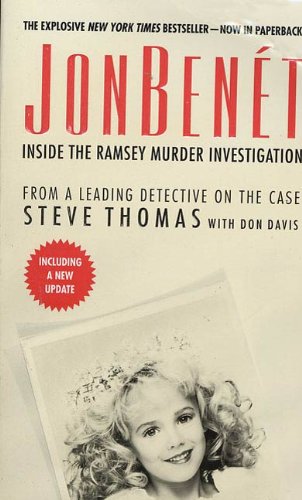 JonBenet: Inside the Ramsey Murder Investigation (4/5 stars, currently priced at $7.59)

Finally, the information you’ve been waiting for: who really killed JonBenet?

Perhaps the most compelling murder case of our day, the death of six-year-old JonBenet Ramsey galvanized the nation-and years after it occurred, the mystery still endures. Who killed the young beauty queen and why? Who is covering up for whom and who is simply lying? In JonBenet, the most authoritative and comprehensive study of the Ramsey murder, a former lead Boulder Police detective, Steve Thomas, explores the case in vivid and fascinating detail-pointing the way toward an analysis of the evidence some deem too shocking to consider. Here, Thomas raises these and many other provocative questions:

-How was the investigation botched from the beginning-and why did police so carelessly allow the crime scene to be tampered with?

-Why were John and Patsy Ramsey protected from early questioning and any lie-detector tests, even though their stories and behavior were erratic, suspicious and inconsistent?

-Why was crucial evidence ignored, why were certain key witnesses unquestioned by detectives, and why were the Ramseys privy to sensitive information about the case and even police reports? 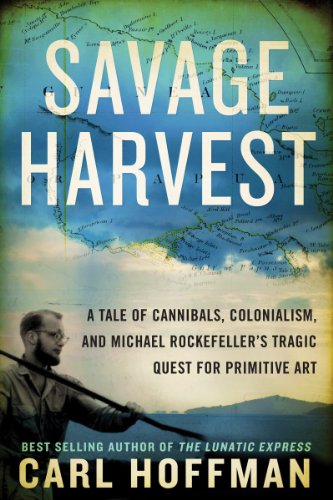 The mysterious disappearance of Michael Rockefeller in New Guinea in 1961 has kept the world and his powerful, influential family guessing for years. Now, Carl Hoffman uncovers startling new evidence that finally tells the full, astonishing story.

Despite exhaustive searches, no trace of Rockefeller was ever found. Soon after his disappearance, rumors surfaced that he’d been killed and ceremonially eaten by the local Asmat—a native tribe of warriors whose complex culture was built around sacred, reciprocal violence, head hunting, and ritual cannibalism. The Dutch government and the Rockefeller family denied the story, and Michael’s death was officially ruled a drowning. Yet doubts lingered. Sensational rumors and stories circulated, fueling speculation and intrigue for decades. The real story has long waited to be told—until now.

Retracing Rockefeller’s steps, award-winning journalist Carl Hoffman traveled to the jungles of New Guinea, immersing himself in a world of headhunters and cannibals, secret spirits and customs, and getting to know generations of Asmat. Through exhaustive archival research, he uncovered never-before-seen original documents and located witnesses willing to speak publically after fifty years.

In Savage Harvest he finally solves this decades-old mystery and illuminates a culture transformed by years of colonial rule, whose people continue to be shaped by ancient customs and lore. Combining history, art, colonialism, adventure, and ethnography, Savage Harvest is a mesmerizing whodunit, and a fascinating portrait of the clash between two civilizations that resulted in the death of one of America’s richest and most powerful scions. 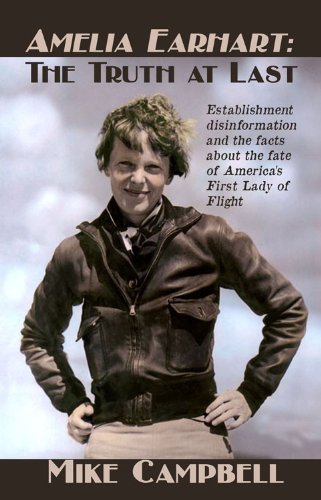 “Amelia Earhart: The Truth at Last”, presents many remarkable and enlightening new findings, eyewitness accounts and analysis, and never-before-published revelations from many unimpeachable sources including famed U.S. generals and iconic newsman and Earhart researcher Fred Goerner’s files that reveal the truth about her death on Saipan, as well as the sacred cow status of this matter within the American establishment.

“The Truth at Last” explodes the government-created myth that Amelia Earhart’s Electra, NR 16020 crashed and sank in the central Pacific off Howland Island on July 2, 1937, and is destined to become the definitive Earhart work. 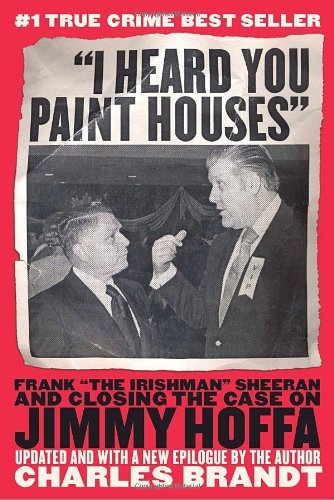 “I Heard you Paint Houses” are the first words Jimmy Hoffa ever spoke to Frank “the Irishman” Sheeran. To paint a house is to kill a man. The paint is the blood that splatters on the walls and floors. In the course of nearly five years of recorded interviews Frank Sheeran confessed to Charles Brandt that he handled more than twenty-five hits for the mob, and for his friend Hoffa.

Sheeran learned to kill in the U.S. Army, where he saw an astonishing 411 days of active combat duty in Italy during World War II. After returning home he became a hustler and hit man, working for legendary crime boss Russell Bufalino. Eventually he would rise to a position of such prominence that in a RICO suit then-U.S. Attorney Rudy Giuliani would name him as one of only two non-Italians on a list of 26 top mob figures.

When Bufalino ordered Sheeran to kill Hoffa, he did the deed, knowing that if he had refused he would have been killed himself. Sheeran’s important and fascinating story includes new information on other famous murders, and provides rare insight to a chapter in American history. Charles Brandt has written a page-turner that is destined to become a true crime classic.