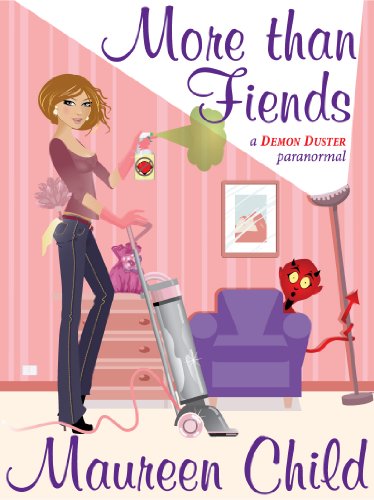 4.4 stars – 33 Reviews
Kindle Price: 99 cents
Text-to-Speech and Lending: Enabled
Don’t have a Kindle? Get yours here.
Here’s the set-up:

Can she save the world and cleans toilets, too?

Worst. Birthday. Ever. Cassidy Burke’s dog ate her breakfast, then her ancient washing machine finally died. Oh, and Logan Miller is back. First love, baby daddy to her genius daughter (won’t he be surprised?), still so handsome he makes her hoo-hah tingle. Which is exciting but confusing because she’s also getting serious flirting vibes from her latest client, Devlin Cole – a tall, dark, walking, talking orgasm.

So forgive her if she’s not exactly thrilled when a strange old lady barges into her house and insists that Cass’s destiny is to hunt demons. A., she doesn’t want to hunt demons, she wants to clean houses (and she doesn’t really want to do that). And B., there’s no such thing as demons. Except… they seem pretty real when they’re coming after her.

As if running a business and being a single mom wasn’t enough, now she has to train to become a kick-ass Demon Duster, decide which hunk to do more than flirt with, and – oh, yeah – dodge the demons determined to kill her before she taps into her full power. All in a day’s work…

5-Star Amazon Reviews
“Maureen Childs joins the ranks of authors mixing paranormal romance and humor with MORE THAN FIENDS. Readers will relish this light-hearted tale as it is practically impossible not to laugh out loud at some of the situations in which Cassie finds herself. Maureen Child has a winner on her hands with this one!”
“This book was soooo much fun. I love books that you just enjoy reading. It was a lot of fun and the characters are ones you can become involved with. These are the kind of books that make you smile.”