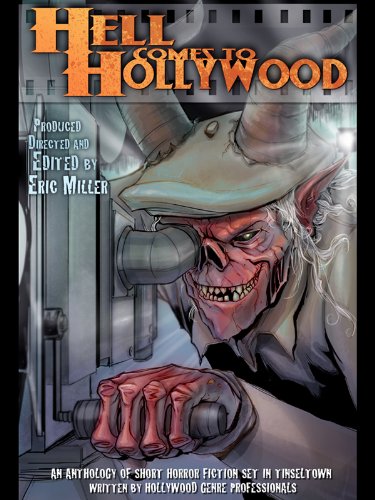 4.4 stars – 24 Reviews
Kindle Price: 99 cents
Text-to-Speech and Lending: Enabled
Don’t have a Kindle? Get yours here.
Or check out the Audible.com version of Hell Comes To Hollywood
in its Audible Audio Edition, Unabridged!
Here’s the set-up:

Vampiric producers, ghostly actors, psychotic limousine drivers, murderous stunt men and more haunt the streets and back lots of Hollywood in twenty original horror and suspense stories set in the heart of show business, and written by veteran movie and television professionals who went through Hell and back to bring you these tales.

“Gorier than any PG-13 horror flick you’ll see, and written better (by a mile) than any SyFy schlockfest, HELL COMES TO HOLLYWOOD is worth a look.” –Dr. Loomis, Aint It Cool News Horror.

“HELL COMES TO HOLLYWOOD is a unique and refreshing read for any genre fan, and genuinely impossible to not enjoy.” –Vivienne Vaughn, FANGORIA

“If you’re a fan of horror, delivered in any medium, this is a must-read.” –Matt Molgaard’s Horror Novel Reviews