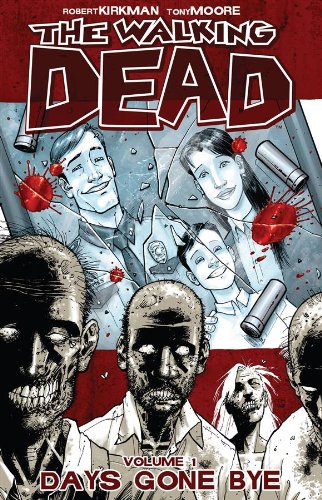 For a limited time, Amazon’s running a sale on the Walking Dead series of graphic novel anthologies in Kindle format. Note that due to their violent and mature content, these graphic novels are not appropriate for young children.

An epidemic of apocalyptic proportions has swept the globe, causing the dead to rise and feed on the living. In a matter of months, society has crumbled: There is no government, no grocery stores, no mail delivery, no cable TV.

Rick Grimes finds himself one of the few survivors in this terrifying future. A couple months ago he was a small town cop who had never fired a shot and only ever saw one dead body. Separated from his family, he must now sort through all the death and confusion to try and find his wife and son.

In a world ruled by the dead, we are forced to finally begin living. 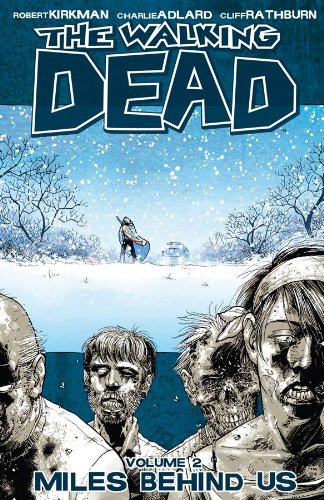 After he found his family, Rick Grimes and a band of others continued their trek through the zombie-infested world.

They were soon joined by more survivors and discovered a farm run by the paranoid but cautious Hershel. 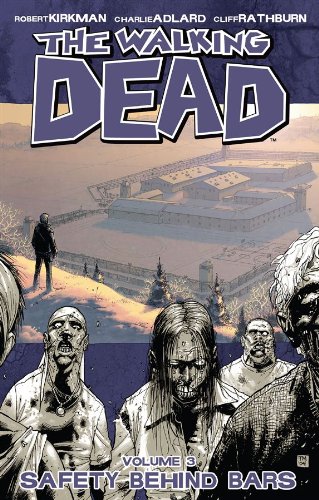 In a world ruled by the dead, we are forced to finally begin living.

This volume follows our band of survivors as they set up a permanent camp inside a prison.

Relationships change, characters die, and our team of survivors learn there’s something far more deadly than zombies out there: each other. 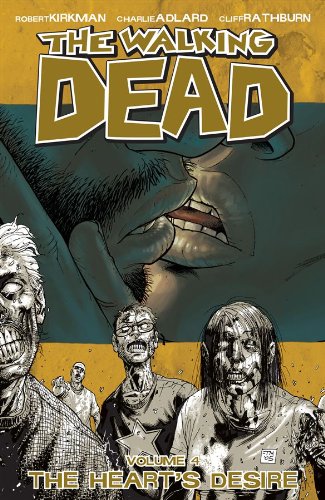 So far, I’ve loved and obsessed over Kirkman’s The Walking Dead series and the previous three collected volumes have not disappointed me at any level. This fourth volume collects issues 19 through 24 and is appropriately titled The Heart’s Desire. We pick up from the cliffhanger that ended the third volume (Safety Behind Bars) as Dexter gives Rick and his group a choice that bodes nothing but death either way he chooses: stay and be shot or leave and take their chances with the zombies outside the fences.

The book starts things off with a bang as Rick realizes that Dexter’s success in getting guns of his own has let loose a bigger set of problems as zombies from a locked wing of the prison [were] accidentally let out. What happens next as Rick’s group and Dexter’s group fight to stay alive shows a new side to Rick that surprised me a lot. It puts a new wrinkle on Rick’s rule of “you kill, you die” and will have long-reaching ramifications deeper in the story. It is also in this heart-pounding sequence that a new face is added to the mix in the form of a female survivor whose mode of survival, to say the very least, is interesting.

Click here to browse all 18 titles included in the sale on the Walking Dead series of graphic novel anthologies in Kindle format.