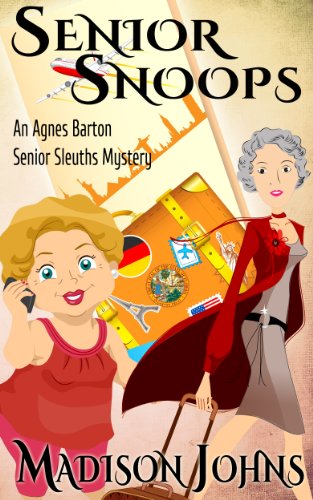 4.4 stars – 15 Reviews
Kindle Price: 99 cents
Text-to-Speech and Lending: Enabled
Don’t have a Kindle? Get yours here.
Here’s the set-up:

True to his words, Sheriff Clem Peterson sends Agnes Barton and Eleanor Mason packing to Florida via a Cessna, but things go haywire when during a fuel stop, two men shoot the pilot. Agnes springs into action slamming the door just as shots are fired while Frank Alton jumps into the cockpit flying them out of there.When they land in Florida, they’re asked tough questions by Putner and Palmer from Homeland Security. They keep asking if they found a packet on board the plane, a packet that Agnes has tucked in her purse, but they never mention what’s in the packet. She decides to hold onto it; after all it contains twenty-five thousand in cash.

Sheriff Calvin Peterson, Sheriff Clem Peterson’s brother, picks them up from the airport in Florida, but tells them the bad news. His brother Clem made arrangements for them to stay at Sunny Brooke Retirement Village and work as the hired help to pay for their room and board. They go unwillingly, but discover in town that two maids have disappeared at Sunny Brooke.

It’s a race against the clock; will Agnes and Eleanor solve the case of the missing maids and finally figure out what happened to their pilot before they also show up on a milk jug?

5-Star Amazon Reviews
“… I can’t recommend these books enough. Great fun and I am already looking forward to the next one in the series.”
“Madison Johns is an awesome woman who put a comedy twist on Sleuthing. Great job. Look forward to many more books by her. She rocks with my two favorites, Agnes and El. YEA! Keep up the great work.”
About The Author
Visit Madison Johns’ Amazon Author Page

Madison Johns is a member of Sisters in Crime.